I must confess that ironing does not rank near the top of my list of favourite tasks. In fact, if truth be told, I would position this particular job somewhere near, if not quite at, the bottom of those jobs I would be happy to tackle. 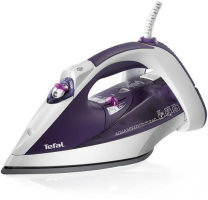 Needs must when it comes to reviewing a product and so I took the Tefal AQUASPEED Ultracord 260 product in hand and prepared myself to work through a pile of clothes, bedding and the like that were crying out for a session with this new iron.  Almost futuristic in appearance, this purple and cream iron comes with a permanently attached wide base (135 x 145cm) that incorporates an anti-slip feature to help secure the iron when in an upright position.

This steam iron is both larger and heavier than other irons I have used previously.  Easy access at the rear of the iron is provided for adding water which could be untreated tap water but distilled water should be considered if you are living in a hard water area.  Buttons are conveniently positioned on the handle for applying steam or a water spray plus giving access to the anti-calc valve for cleaning.  A slider bar allows you to adjust the thermostat control depending upon the type of fabric being ironed.  The base of the iron, which after all is the main component doing all the hard work, combines the various steam holes within a grey and cream lined pattern.

Initially I encountered a problem when using the iron as the collar, around the lead where it attaches to the iron, would rub against my wrist when ironing.  This tended to force my grip further forward towards the front of the iron and into contact with the steam and spray buttons whether I needed these facilities or not.  Fortunately a solution was available.  The iron has been designed with the Ultracord system which allows the cord connection to be in a locked or unlocked position.  When locked the collar section of the cord would be held in an upright position when ironing so causing the rubbing against the wrist.  Changing to the unlocked position, the collar would adopt a sloping alignment so avoiding contact with the wrist while still preventing the cord from dragging over items being ironed.

As mentioned this AQUASPEED iron is heavier, in fact almost twice as heavy, as the last iron I used.  This meant that I was inclined to take more rests by placing the iron in its upright position.  Fortunately the attached base module helped hold the iron in position without any worries of being accidentally knocked over.  When placed in this position the cord would automatically assume its normal position and then drop back when the iron took up its ironing position.

The AQUASPEED Ultracord 260 performed all its ironing tasks without giving any cause for concern.  I was satisfied with the quality of the ironing and felt comfortable using the device.  Unlike the previous Tefal product (Toast n' Egg) that I looked at, this iron has a fairly generous 290cm of power lead.  The product will be available from major retailers at a price of £59.99.