Over the last few years the trend in television has been for ever bigger screens - whether LCD or Plasma. There is however still a market for the smaller set - either for bedroom, kitchen or den. Humax have addressed this somewhat neglected market with a range of 19 and 22" highly functional sets. 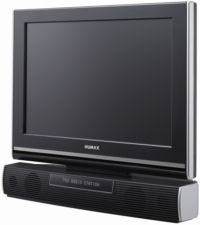 I'm reviewing the 19" version here. Like it's slightly larger 22" sibling this set is available in either black or white. The display is a 1440x900 wide-screen panel with a wide 160° viewing angle. This sits on an integrated stand that contains the stereo speakers. Dimensions for the whole unit are approximately 500x439x170mm (Width x Height x Depth). The depth is due to the base of the unit that houses the stereo speakers. Weight is a fairly modest 8.2Kg.

Shipped with the television set itself is a remote control and manual. The manual is worth mention - unlike some that we've seen this is clear, well written, comprehensive and printed in a font that doesn't need a magnifying glass. Almost all features of the set are covered in 62 pages.

It's quite interesting how we've become accustomed to ever larger screens. To review this product I replaced our existing 32" LCD set while the kids were out. When they returned I had complaints along the lines of "have we got to watch Skating on Ice on that? It's so small". Two days later though they had adjusted to the smaller display and were quite happy.

Provision has been made to allow the product to be wall mounted and the designers have taken care to ensure that none of the rear connectors obstruct or prevent such use.

Both analogue and digital tuners are integrated into the product. With my rather ancient external TV aerial the digital tuner managed to find 44 television channels and a host of digital radio stations. With digital television you get all the usual benefits of electronic programme guide (EPG) and programme information. You can also search the guide for a particular programme.

In answer to the traditionally tinny sound most 'second TVs' provide, Humax have gone to great lengths to provide good quality audio. The stand includes twin 8W speakers providing stereo output and they have licensed SRS TruSurroundXT - a surround-sound technology that actually works remarkably well. The quality of the sound is exceptional given the size of the unit - bass reproduction is very good and volume more than adequate with no real distortion at higher settings. The price you pay for this quality of sound is the depth of the stand that could be an issue for those wanting to wall mount - this isn't going to be as flush with the wall as others. For those wishing not to disturb others a 3.5mm headphone socket is provided.

Humax have catered for a variety of external connections to facilitate most peoples requirements. Apart from obviously operating as a standalone digital TV, there are also SCART, HDMI, S-Video, Component and Composite inputs. Finally there is are standard VGA and audio-in for operation with a computer. The manual includes very clear instructions on how to connect to a variety of external devices.

For the second part of this review the Humax was removed from the living room to the study and in this case connected to my computers second video output. The computer had no problems automatically identifying the new screen and correctly selecting the appropriate resolution (1360x768 at 60Hz). I'm unclear however why the computer resolution is less than the 1440x900 native screen resolution.

A separate 3.5mm input jack allows you to feed computer sound through to the internal speakers.

Playback of computer video was very good - both playing a traditional DVD but also more interestingly playback using the BBC iPlayer and channel 4 'on demand'. Pairing a product like this with a media capable PC makes an ideal entertainment solution. The unit is however primarily a TV - not a monitor and is optimised as such. Text is not as sharp as a dedicated monitor and the lack of ability to tilt the screen means most people are not going to be comfortable working in front of it for a long time. The resolution is also somewhat lower than I'd preferably like for a full time monitor. For the occasional computer user or for browsing the web it is more than adequate.

In digital radio mode the LCD panel is switched off after a short delay reducing power consumption. In this mode a separate dot-matrix 'Vacuum Fluorescent Display' in the stand shows the current station.

If you have a digital signal then you can use an alarm feature - allowing you to wake to either your choice of TV or radio station. Unfortunately the alarm function is only available if you have digital TV - there's no option to manually set the clock. For most people this shouldn't be much of a limitation.

The LGB-19DZT is available directly from Humax for £204.55 on the following link, which is toward the top of the price range for this size TV :

If you prefer a larger screen then the same functionality is available with 22" panel as the LGB-22DYT for £292.64 :

Hi Paul,
Humax have a page in there support area with links to manuals for a lot of their products (possibly all?) and in various languages. Link is:
http://www.humaxdigital.com/uk/support/downloadcenter_manual.asp

The specific link for LGB-19DZT manual is here. Note though that the manual is 13MB and the download time is pretty slow (I'm only getting around 25K/sec so it's taking around 10 minutes to download). I'd strongly suggest right-mouse-clicking on the above link and doing a 'Save Target As'
Pete

Is there any chance of getting the manual emailed to me as an adobe document because i bought one today but it was a display model and there was no manual or remote control included and i want to find out how to turn on the radio?
Rating:

Update : Humax have extended the exclusive GadgetSpeak special offer - £100 off this excellent TV - until the 15th April as a thank you for helping them fix the Firefox/Safari problem on their site.

So we in turn pass our thanks on to reader "MCS" for spotting the problem in the first place!

We've just emailed the lucky winner of the March competition to confirm details - so if you haven't won you can still get this TV at a very special price. The discount code remains "PDZT11". If you do have problems then do let us or Humax know. You can also order by phone if you have problems with the Internet. The number on which to order is 0844 669 0677.

Remember you now have until the 15th of April

Hi All
No problem getting my £100 discount via a website order direct to Humax last Friday - the Humax TV arrived today, Mon 31st March. The auto sent e-mail said the TV cost £299 even though I had quoted the discount code, however I then e-mailed Humax Direct and they confirmed the discount would be applied, which it was.

What a super TV - great sound and excellent quality in every way. I particularly like the digital manual tuning facility as I am in two reception areas (Yorks & Tyne Tees) so I can set out the channels as I want them in the channel list by tuning the wanted transmitter (Emley Moor) before I tune in the 2nd choice transmitter (Bilsdale). This can't be done with many of the Freeview boxes and IDTVs that autotune only. I also like the screen blank mode when listening to digital radio stations - the blank screensaver comes on after one minute and the radio station name and channel is then displayed in the LED fluorescent display below the screen - a unique feature I believe.

Delighted with my purchase, thank you gadgetspeak and Humax Direct.

Update on the discount problem. Humax have looked into the problem we've reported with them and have now made the necessary changes. The discount code should now work if you're using FireFox and Safari.

If anyone does have problems though please report them.

Thanks for reporting the problem MCS. I've done some investigating of my own.

As far as I can tell the discount works fine in Internet Expolorer, but the way it's implemented it fails to work in either FireFox or Apple Safari. I've sent a detailed report of what's broken and why - so hopefully they'll be able to repair the site.
Rating:

Looks good. Tried to order with your £100 discount code. Code works until the final stage of transaction after adding delivery, when it changes back to the original price of £299. I'm not buying at that price!!!
Rating:

I still think this is a top quality product at an excellent price but, i went and had a look at one of these sets yesterday as i was seriously going to order one but the one thing that puts me off is that the speaker system at the bottom is quite deep and sticks out quite a way at the back of the set which would make it very awkward to wall mount the unit.
Rating:

Looks great,but would look even better in my house.!!!!
Rating:

It sounds brilliant just what FI'm looking for for the bedroom and I can plug my headphones in if I wake in the middle of the night and won't disturb my neighbours.  top  quality at a reasonable price.
Rating:

Nice for the bedroom - looks quite neat.
Rating:

At last!  Something that is in proportion to the rooms in my house.

I think that enormous screens are going to be the 'Avocado Bathroom Suite' of the future.

whoops forgot the rating.... lol here it is..
Rating:

Now that is a fab looking TV
Rating:

I really want that one, please!!