A compact food processor for basic food preparation tasks around the kitchen. 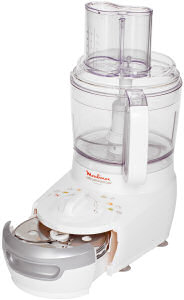 The Moulinex Vitacompact is designed to take up minimum space in the kitchen and achieves this by incorporating the major functions you would expect - without all the frills. There are only two major units to store away from the countertop machine - the liquidiser and the citrus juicer. For practical people with little space, this is a major consideration. I particularly liked the storage compartment for the accessories - a neat little draw which sits below the mixing unit. It's easy to see which bits go where and the chopping blade stores in a pretty safe place at the base of this drawer.

The citrus press was easy to juice, and not so powerful that you endanger your knuckles using it. Six oranges produced an impressive amount of juice, just short of a pint. The pouring spout worked well and you can fit a large variety of collecting jugs underneath it.

The liquidiser worked perfectly well, producing smooth soup when I tried it. The chopping blade, which can also be used for cake mixing also did it's job as expected. The Banana cake I made with this accessory turned out lovely and fluffy.

The two accessories I didn't get on with were the grating and whisking disc.  On putting some cheese through the grater, a  noticeable amount of cheese slipped between the disc and the lid, not reaching the bowl below.   Pavlova is my favourite recipe for testing out whisking accessories, and I've found that nothing beats proper electric whisks.  The whisking disc did not flufff up the egg whites well, and left me with a rather limp looking merginque base.  This is not necessarily a fault specific to the Moulinex, but probably more an indication that for a specific job, you need to think carefully about the right tool.

I also had a little trouble getting the lid to sit nicely on the drive shaft a few times. The machine still worked even when I got this wrong.   In general this machine is also a little noisy.

The Moulinex Vitacompact is a simple to use food processor doing the basic jobs satisfactorily.  By being compact it's missing some of the nicer quirks of more expensive mixers on the market, like mini-whisks and bread kneading tools. However, at around £79 it's more expensive than simpler compact food processors. The difference does buy you a citrus press, but if you're into juicing you would be wise to invest in a serious juicer!

This is a neat and serviceable mid-priced food processor with the basic functions you might need, and a citrus press thrown in for good measure.