The Sonoro goLondon is a DAB/FM radio although without the rod aerial raised it might not be immediately obvious. The shape is vertical and the actual controls are underneath, it does take a while to get used to this units rather unusual format. 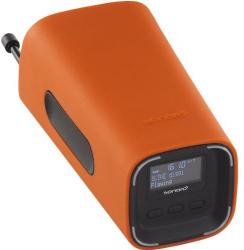 The six piece rod aerial is 38cm when fully extended. The sloped top is the speaker and the only control is the twist on/off/volume control.

At the back towards the bottom is a gap in the rubberised sleeve where there is a slider DAB/FM, DC input and Auxiliary input.

On either side there is an 8x2cm depression which facilitate holding the unit when moving around with the radio.

The basic colour is white but apart from the top, the depressions in the sides, the gap at the bottom and the base everything is covered in the rubberised sleeve which is available in various colours mine was a royal blue.

The base has a small 3.5x2cm white on grey display under this are three touch buttons marked down, menu and up. At this point you will probably need to refer to the small Instruction Manual which has 28 pages in English.

The display has two 16 character lines of display to show the station on line one and any further broadcast information on line two. There is a line above these that displays time, mode, battery remaining and signal strength.

Before first switch on you need to plug in the DC lead to put some charge in the battery, extend the rod aerial and when you switch on the DAB auto scan will take place, it found 63 stations for me, all had reasonable or good reception.

Move the slider on the back to FM and you will be at the lower end of the wave band, push the down button and you move to the top of the wave band, move down the spectrum in .5 of a MHz and faster by holding the button when you tune to station it will often change to the name of the station but not always. There are presets available, ten for FM and ten for DAB. The FM ones are perhaps more important as otherwise you always need to remember the frequency and tuning can sometimes be a little fiddly, whereas alphabetical scrolling on DAB is easier.

The manual explains how to change the various settings. Everything starts with a longer than two second press on the menu button then you can move up or down the choices and work through the various sub menus.

It can be used while on mains or with the mains lead removed assuming the battery has power. I used it round and about my home as well as in my garden and garage I found that the battery lasted around 17 hours between charges.

While it can fit in a small space because of its 8.5cm square shape having to lift it up to press buttons underneath it make it a less than easy thing to change stations especially when tethered while being used on mains.

The speaker is small and I would really only call it adequate so I am not sure that you would make a lot of use of the Auxiliary input.

Doing my searches found the Sonoro goLondon at £129.00 with free delivery.

WHY? Why do people design things like this. Controls on bottom, a shape that will not fit easily into a pocket and a massive price. Will it sell? Not to me!