My recently acquired iPod Nano 5th generation got an outing here. However hands up those who remember the ghetto blasters those of a certain age carried on their shoulders that will give you an idea of the size of this interesting product. 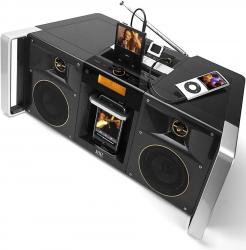 The iMT800 from Altec Lansing measures 50x19x20cm at the front narrowing to 36cm at the back. While it is an iPod and iPhone player it does a lot more and has six mighty speakers built in, however it is designed for use on mains power and for good reproduction. For those who long for their ghetto blaster days it can also be run from eight ‘D’ cell batteries.

There is a line of five controls towards the front edge of the unit that can do most things with the unit but of course there is a remote control to allow everything to be done from your armchair, until the dog eats or buries it.

The five buttons are source allowing you to choose iPod/iPhone, Aux 1 and Aux 2 (two leads provided) or radio. EQ that allows you to set both bass and treble levels. Track back and Track forward, these four controls are all touch and have an orange glow, in the middle is a multi function know push on/off and twist clockwise or anti clockwise to increase or decrease the volume levels.

At the rear of the top behind a carry handle is a nine piece rod aerial that expands to 67cm when fully extended. Between this and the carry handle is the dock for the remote control and two 3.5cm sockets for the Aux inputs.

The base has the entry point for the ‘D’ cell batteries and the back the input for the mains leads, there are no other connections.

The iPod/iPhone connector is in the centre at the front and a slide bar allows this some protection should you use it out and about. To the left and right of this are four of the six speakers the other two speakers dominate the sides of the unit.

I would expect most to work out the controls without recourse to the 22 pages of the manual in English with one exception that is how to set the choice of four modes and access the seven band graphic equalizer - the latter is rather good – but this is clearly laid out in the manual.

In fact the manual hides one other feature the ability to set a personalised sign on message shouldyou want one.

I was perfectly happy with the sound from my iPod and the added depth given by being able to set bass and tone levels (-10 to +10) the graphic equalizer was also nice and this overcomes only having default (Altec), Rock, Hip Hop or Pop settings. I consider that both Jazz and Classical should certainly have presets in the unit.

Your iPod/iPhone will of course be charged while in the dock playing or not while power is connected to the unit.

I did try out the Auxiliary inputs but while someone may a use for two external inputs surely one would satisfy most.

Having six speakers does somewhat count as overkill for an iPod/iPhone as the average MP3 is compressed, however the radio can sound rather good when a station is received in stereo but only really for Classical music.

Doing my Internet searches found the Altec Lansing Mix at a best price of £259.99 including free delivery from the first link below.

I found the Altec Lansing iMT800 Mix available for $217.70 including free delivery direct from Amazon on the link below.