First a wireless device great for the energetic that enables them to hear music or phone calls while indulging in exercise. Second a small speaker to enable your iPod, MP3 player or phones content to be heard by all. 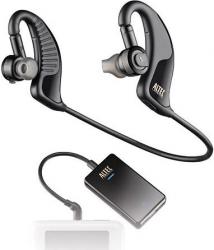 All the controls are on the earpieces so it might be as well to study the manual before you depart so you what to press to control what. The play/pause button is on the outside of the right ear and the volume control of the side. The left ear has the phone button. As they clip over the ear and the moulded fitment goes in the ear the contact is good. The connection behind the head holds as well. While running and me might go as far as a few metres to catch a bus. I did try them with vigorous head movements and they stayed firmly in place.

Apart from the charging equipment the box of accessories allows you to connect things (non Bluetooth) like an MP3 player via lead provided to get the benefit of the earbuds. Either way the batteries last up to seven hours between charges.

Doing my Internet searches found the Altec Lansing BackBeat 906 at a best price of £59.90 including shipping from the first link below.

Described on the box as a ‘mighty little speaker’ it certainly is. Portable audio is a huge market but there are many times when earbuds or headphones are not convenient and that is when something like the Orbit comes into its own.

It is circular at 8.5cm and 5cm tall. It runs (for around 24 hours) on three ‘AAA’ batteries (supplied) there is an on/off button at the top of the side and a green LED beside it.

While it comes with a 3.5mm jack on the end of a hard wired 20cm lead. For those with a device with 2.5mm jack you are catered for by a 3.5 to 2.5mm right angled jack to allow the sounds from your phone or other device to still be heard through the Orbit.

There is no volume control on the orbit so you set the volume level on your player. The recommended level according to an eight language slip of paper in the device is around 85% and it also states it is best to disable any bass boost.

A simple single sheet describes the five actions required to get you up and running from removing the Orbit from the box to hearing your music. All in illustrations so understandable in any language. Unpack the box you will have the three ‘AAA’ batteries, a carry case for the Orbit, a wrist strap for the case the 2.5mm adapter and the instructions and of course the two year tightly packed warranty instruction sheet.

The three batteries fit into the twist off base of the unit, the polarity is shown clearly. Next attach your iPod MP3 or other such device either with the hard wired 3.5mm jack or with the 2.5mm adapter attached to the end of the 3.5mm jack. Finally after switching on your device switch on the Orbit and that is all you have to do.

Sound quality is excellent and I will go as far as to say I can hear things from my iPod when used through the Orbit that I do not hear when used with either earbuds or a headset.

Doing my Internet searches found the Altec Lansing Orbit at a best price of £19.50 from the first link below.