Kensington have added to their range of audio accessories with this set of travel speakers, suitable for any media player with a standard jack socket but very obviously aimed at the iPod market. 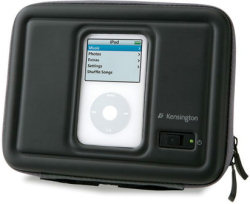 The Kensington FX500 "speaker to go" is a slightly bigger than an A5 sheet of paper at around 150x200mm, around 35mm thick and weighing 400g. The unit has a soft finish that should be fairly robust and is reminiscent of a small zip-up folio case.

From the front the product has a central clear window through which you'll be able to access front-mounted controls on your favourite MP3 player. A power switch is situated to the lower right. When switched on the power switch is accompanied by a bright LED to remind you to switch off when not in use.

A zip neatly splits the case down the middle opening much like a book. Inside you have access to the battery compartment and the central window into which you'll put your music player. This is a battery only unit - there's no option to run from a mains adaptor which is a real pity. What might be a useful set of speakers when on the move would equally be useful on a desk or bedside table and having to continually replace batteries is really unnecessary.

Three AAA batteries power the speakers which claim to give around 10 hours playing time, which in my experiments seems about right.

The central MP3 player window is very obviously designed for a specific iPod - probably the classic as it's now known. The player is kept in place by an elasticated velcro strap. A foam inset appears to cater of the old slim-line iPod Nano. I have neither of these. Instead we tried the new iPod Nano and iPod Touch.

The new iPod Nano is too wide for the inset and so you're left with using the foam inset to wedge the Nano against the transparent front (you have to have it pressed snugly against the window in order to be able to use the touch controls.

The iPod Touch (and presumably therefore the iPhone) is too tall with the 3.5mm jack inserted there's not way for the face of the iPod to press against the window.

This is of course the risk that manufacturers take when trying to join the iPod economy - the range will change every year and with each generation the form factor will change and your product is likely to need a redesign of it's own.

Sound quality to us was somewhat mediocre. While the volume was satisfactory for individual use, turning the iPod volume to maximum lead to significant rattle and distortion. Bass was fairly non-existent.

Integrated into the speaker unit is a metal stand. This just seems to flap around on the outside of the case - folding around the case. There doesn't seem to be any way of holding it in place. In use the stand provide for the speakers to be held at around 45 degrees, however due to the weight of and the size of the stand the result isn't particularly stable.

The main benefit of these speakers over others on the market is that it does provide some protection to your iPod on the move. Set against that is though is the limited suitability for the latest generation of iPod and the average sound quality. At around £25 this is around the same price as the Altec Lansing 'Orbit' we recently reviewed. Placing the two side-by-side the sound quality of the Kensington is easily outclassed by the Orbit.

The Kensington FX500 is available for £25.32, including shipping from Amazon on the following link :