Continuing my series of 32 and 37inch LCD TVs with this Digital and Analogue TV from LG, having both means PIP (Picture in Picture) can be used to show a second channel. 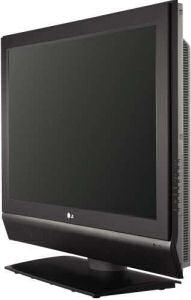 The 32 inch LG product was reviewed in the same place as the 37inch offerings with my own 28inch standard TV sitting on the floor sulking. While there was more space on top of the unit the missing five inches does not really detract. It is 80x61x13cm and sits on a silver grey stand that is 21cm deep at the widest point in the centre so the panel itself is well within the stand.

The TV frame itself has a small silver grey edge with a larger silver grey panel at the bottom to house the perfectly acceptable speakers. The actual viewable area of the screen is 71x40cm giving the diagonal 31inch size.

It was not until I read the instruction manual that I realised that the unit had some controls on the TV - until then I had only used the remote - on the right side in the very dark grey colour exactly the same as most of the unit, there are eight buttons but everything they do is duplicated on the 64 key remote control.

So unpack the unit place it where you want it, attach the aerial lead and plug the computer type rubber lead into the back. A red LED should now come on at the right bottom of the face of the unit. Press the power button the LED will turn green and then press the menu button on the remote. Follow the onscreen prompts and a few minutes later you will have found the five terrestrial stations plus any cable of Sky boxes. I also have a video recorder but as it was switched off during the tuning I had to tune this manually later. I was pleased to see that channels 1 to 5 were in the BBC 1 BBC 2 etc order automatically and there picture and sound quality were perfect. Next I switched to digital and found that the tuning had already taken place and the whole range of Freeview TV and Radio channels were available.

The Teletext memory is large and it is almost instant, pages with many sub pages can be changed and even held - and updated - so if sub page 6 or 9 interests you it is easy to stay with it. You can change from Analogue to Digital using the top left button on the remote however to change to one of the AV channels you need to select the actual channel from the top right button, so AV1 is a different selection to AV2 and not a toggle as with most remote controls, it's just different.

The rear has two SCART input sockets and a SCART out socket vital so you can record to a video or DVD recorder through SCART. There are also a large array of other inputs and outputs so you could also connect a PC. It also has card support so you can display a screen show of images from a SD card. Full details are available on the LG website - the second link at the end.

PIP is a feature that has been available on all the recent TV's I have reviewed but as they were only a single tuner another TV channel was not available, all that is rectified here and in a range of ways to position on the screen.

There have been a few reader comments about some blurring of the image with fast moving action with one of the 37inch units. I never noticed it but I redoubled my efforts to spot any such problem on this unit and could find none, not even with low camera angles at race meetings or football matches with rapid tracking.

When using the Digital Tuner the unit has a full eight day programming guide, this is very useful for taking programs off to be recorded as you can select from it in advance. Unlike some Freeview boxes it is not necessary to leave the unit in standby overnight for the full eight day update. You must however leave it in standby for the channel to be accessible for recording.

This brings me to my only real gripe about this LG unit, the only way to turn it off - not place it in standby - is to pull out the computer style plug or unplug at the mains. Some may say why, the main reason is simply to save energy as even in standby some power is used, have you checked your electricity bills lately?

I liked this unit very much and made good use of PIP and most of it's many other features, I did pull the plug at night when programs were not due to be recorded and I always had the full eight day programming guide available.

i have  just bought phillips 32" lcd t.v..decent tele,  but one small problem which is bugging me. whilst watching the picture 'very slighty' darkens then goes back to normall  intermitently.its as if  the contrast setting is moved then put back very weird. i'm unsure if its the t.v  or my sky reception, so ibought a gold scart lead but no joy . someone help
Rating:

thanks for the review.

I just wanted to say that standby gripe is quite subjective. The cost of keeping the TV on standby for a whole year is approx £4. Personally that isn't a major problem for me.
Rating:

Same problem here, so if you get a response I would like you to share it! I have the 32LC2DB hooked up to the LG RH7500. I would like to know the correct scart(ing) info and the set up to record free to air from my TV whilst watching another chanell. Many thanks George
Rating:

hi paul, ..read your article with interest as i have just bought this LG 32LC2D hdtv myself...but i'm having problems connecting my lg dvd/hdd recorder to it and wonder if you can help me out?. the problem is i cannot get my recoder to auto programme to all my tv channels..all i can get are the 1-5 terrestrial channels and absolutely none of my freeview channels..i've tried every cable configuration i can think of but nothing is working..after 4 + hrs i'm getting cheesed off!..i'm connecting at the moment with a hdmi cable?..can you help me?...kindest regs gavin
Rating:

hi paul, ..read your article with interest as i have just bought this LG 32LC2D hdtv myself...but i'm having problems connecting my lg dvd/hdd recorder to it and wonder if you can help me out?. the problem is i cannot get my recoder to auto programme to all my tv channels..all i can get are the 1-5 terrestrial channels and absolutely none of my freeview channels..i've tried every cable configuration i can think of but nothing is working..after 4 + hrs i'm getting cheesed off!..i'm connecting at the moment with a hdmi cable?..can you help me?...kindest regs gavin
Rating:

Currently on offer at Novatech for £591.73 with next day delivery included. http://www.novatech.co.uk/novatech/specpage.html?lg-32lc2db