This is a digital camera that is easily small enough to fit in a pocket or purse but this does not mean it is lacking in features. It is a 12MP offering that has scene recognition, face detection and auto red eye removal to mention just three. 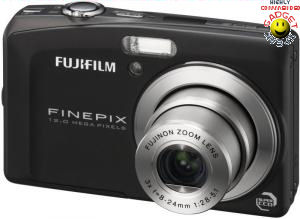 It is 9x6x2cm and weights only 165grams. Doing a quick run round the unit mine was a rather nice matt black with silver fitments such as the Fujinon lens F=8-24mm. Above and to it’s right by a minimum of 2cm is the flash. The left side is bland while the right side has wrist strap anchor point and A/V out behind a door. The base have the rechargeable battery behind a door that also hides the card slot, to the left of this is the tripod anchor point. The top has on/off and anti shake buttons and between these the shutter button with the wide angle/telephoto control around this. The back is dominated by a 3inch (6x4.5cm) TFT display. In the 1.5cm width remaining to the right of this are four well labelled buttons an eight position wheel and of course the ubiquitous five position joystick.

A novice could just stick a card in the unit press the on/off button and once they have made sure the wheel is on the red image of a camera just take images with perhaps the occasional movement of the wide angle/telephoto adjust get rather good images letting the camera make all the choices.

However a read of the manual should have them wanting to improve and to start using some of the cameras features, it does not simply go from ‘Auto’ to ‘Manual’ as the wheel shows in detail what certain positions will do. For Instance click once to the left for Scene Recognition where it will make the choices but include you in the experience. The next is a setting that not all cameras have ‘N’ making the best use of ambient light and not using the flash – very useful in places where flash photography is frowned at or even forbidden – Next is Portrait where facial tones are the point featured and tones are enhanced. Movie mode is next and for a Digital Camera this takes rather good movies. Aperture Priority is probably something for when the manual has been studied but it give Auto settings but with the user setting the aperture. Next is manual where the user has several options available. The last is very interesting called natural and flash where two images are taken very quickly one with and one without flash and you can incorporate the best of both into a single image, it needs some knowledge to use it well but results can be unexpectedly good. The end result is normally two images with an ISO number doubled, IE 400 and 800 or 200 and 400 or even 800 and 1600, the content of the images taken at the same time are often highlighting different points.

For still images it can take eight different sizes and compressions from 12MP fine down to VGA. The ‘F’ button allows very easy changing of resolution and that window shows how many images are available in that mode. For movies it can take 640x480 or 32ox240 and again in the adjustment window it shows how many minutes and seconds can be shot on the current card. 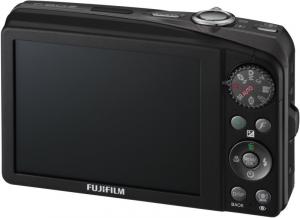 I like this camera and it has a lot of features that require investigation however the two things it lacks are the same two that seem to be lacked by just about every digital camera on sale, no card and no case. Of course the reason they are not supplied is that large retailers often say they will not stock the cameras if they are. It would take just one large manufacturer to stand up to this blackmail to break it. Years ago when 2MP was a high resolution and a 16MB card cost a lot then cost was a valid argument. Now a 1GB card costs well under a fiver, a case is an essential as the TFT screen is very likely to be damaged by keys or change. Of course some of the more enlightened Internet retailers offer a card and case for peanuts with the camera and sometimes they are even cheaper than others offering the camera alone.

Fujifilm offer you a choice of cards they still support xD and now the more widely accepted SD the beauty is either work in the single slot in the camera. For those who really read the small print you will find that you can probably store a few more images on the same sized xD card than its SD counterpart, however xD cost somewhat more.

Doing my Internet searches found the very new Fujifilm finepix-f60fd at a best price of £149.36 $214.95 €192,68 including free delivery from the first link below. The second link has a lot of extra information and even a video about the camera.

My Name is Ian from Photo Walks of Londom (.com). I had two walkers with me one of whom had a Finepix F60. The nature of my work involves helping people with a whole host of cameras from SLR's right through to the most basic point-and-shoot.

The Finepix has been the only camera to baffled me. I do not understand that once the setting have been placed on manual it will still alter according to the light, surely one should have complete control on 'M'

Unless i have missed something really obvious!