When last we went to battle against each other, America gave Britain a bloody nose. Maybe this time you can engineer a result that will be different. 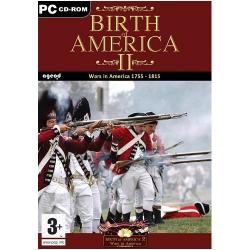 Birth of America II: Wars in America 1750-1815 is not only a lengthy title for a game but also a follow up to Birth of America from the AGEOD and Ascaron Entertainment partnership.  This is a turn-based strategy game that sets the player the challenge of taking part in various battles based on historic events with authentic characters and fighting units of the period.  Successful players could even image they were remaking history by taking charge of either side during the various battle.

Installing the game is straightforward although you are presented with a tabbed display for making adjustments to the size of the screen display, resolution and whether to use software or hardware controlled mouse plus entering the product’s serial number which is 37-character’s long.  Firing up the program brings a rather old-fashioned (this is a historical title after all) looking menu with choices represented by monochrome illustrations of the period.  You can start a new game, load, save or resume; replay the previous turn; check for updates; change game settings; plus quit.

Included among the choice of 22 battles is a tutorial which leads you through some of the basic controls used by the game and introduces you to the top down view of the landscape.  While the tutorial is rather short, just four turns, it does give you some indication as to the playing area and the means of issuing orders.

Placed in charge of the British forces, with the goal of capturing key cities of South Carolina, you are faced with a detailed map of the area.  You can scroll the map in different directions plus gather more information about the terrain and resources by touching areas with the mouse cursor although some areas do fall under the influence of Fog of War.  Information is one area in which this title is particularly strong, in fact you could easily be overwhelmed by the amount of data the program can deliver

Panels across the top and bottom of the screen provide a side view of the current location and selected resources respectively.  Directing forces towards specific destinations is carried out by drag & drop with other orders being implemented through icons in the resource panel.  In the top right corner of the screen is the “Next Turn” button while a mini-map with adjustable focus box sits in the bottom left corner.

If the cut & thrust of battle appeals to you then Birth of America 2 will be a big disappointment as the actual combat is conducted behind the scenes. The program merely reports back on the results as you consider your next move.  However if strategy and historic detail is more to your taste then this title has plenty to offer for the experienced devotee of this genre.  The amount of detail involved could put off those new to this type of warfare game playing but it is worth some perseverance.