While there is plenty of publicity and action regarding the food we eat, there seems to be less concerns about the water we intake. 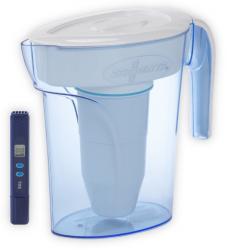 Turn on the tap in your kitchen and you should receive, unless there is a blockage somewhere in your pipes, an output of sparkling water.  This liquid can then be used for a variety of tasks including providing the body with an important element for a healthy existence.  However, while the water you receive from a tap might have the appearance of a clear water, it is not always the pure liquid we think it is despite the efforts that have been made to remove impurities by suppliers.

If you are worried about the water emerging from your household taps then the aptly named ZeroWater company has a possible solution to ease your mind and give benefit to your taste buds.  I have been looking at such a solution in the form of the company's Filtration Jug.  Adopting an appearance of what could be considered that of a "jug-on-steroids", this filtration device has a capacity of 2.8 litres of liquid.  This works out at 12 cups of ready to drink purified water.

To help keep its content free from impurities, this filtration jug features a protective, removable top cover.  This cover has a small flap from which water can be dispensed from the jug's spout element.  There is also a grip handle for easy transportation of the jug between locations.  Positioned on the rear base of the jug is a button facility that allows water to be poured from the base of the unit if some family members find the jug too heavy to lift and pour when it is full.

As well as holding the water, delivered from a household tap, for purification, the jug is also home to a filtration system.  The ZeroWater jug makes use of a 5-stage ion exchange filter system unlike the 2-stage system used by some other products.  This filtration unit, which is replaceable, has to be slotted into the jug prior to use.  Instructions on how to carry out this process are providing on a sheet that is to be found in the jug when it first arrives.

The ZeroWater filter unit, once installed and with the jug filled with tap water, will automatically begin its task of purifying the water within the jug.  As mentioned, this purification process involves a five-stage operation as impurities are removed from the water while allowing you to carry out important tasks such as twiddling your thumbs.

Stage One of the ZeroWater  procedure makes use of a Course Filter Screen.  This is aimed at tackling elements such as dust and rust which has taken up residence in the water.  You may not see this type of element but it is there.  The water is dispersed over the width of the filter so that Stage Two can deal with other elements and contaminants that may be present in the water.  Stage Three involves the use of a multi-layer carbon and oxidation reduction alloy.  This stage deals with issues of improving the taste of the water with the removal of elements such as chlorine and heavy metals.

Stage Four then steps in with its Ion Exchange feature that cleans up and dissolved solids that might have been missed by the earlier stages of the procedure.  Finally Stage Five of the process carried out its task as it removes suspended solids and ultrafine particles.  This level of cleansing is carried out through the use of ultra-fine screens and non-woven membrane layers.  The five-stage process, which is generally carried out in around ten minutes per jugful, is claimed to remove 99.6% of impurities that could include Arsenic. Barium, Cadmium, Copper, Iron, Chlorine, Fluoride and Nitrite from the life-giving water we drink on a regular basis.

Allowing you to carry out a "before and after" test on the water delivered from the tap and that provided after by the ZeroWater Filtration Jug, is a TNS Water Quality Meter which is included in the package.  A bit like an over-long flash stick, this device can give readings regarding the purity of your water and provide information as to when your filter unit needs replacing.  ZeroWater may not turn your water into wine, but it could give your taste buds a treat.

As reviewed the 12-cup ZeroWater  Filtration Jug is priced at £39.99 with smaller and larger units being available if they are more suitable.  Replacement filters are available with prices starting at £19.99 for one unit.