Nescafe produce a large number of two pod solutions for those liking a coffee with milk, Cappuccino, Latte and most other possible combinations. Until now there has only been a single offering in one pod Flat White. In the last five years there has been a 400% increase in Veganism so to help those who do not partake of dairy items, three plant based offerings have been produced, Coconut, Almond and Oat and while I was checking these out along with the original Flat White I found Starbucks had produced a single Pod Café Latte. 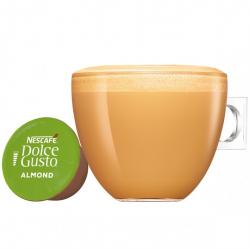 So let’s deal with the Starbucks Latte first, all recent pods have slashes on the front of the box to denote the desired setting on an automated machine, and I noticed that this like the other samples I was sent all come in a brown pod.

To my taste it was a less enjoyable drink than those made with a coffee and a milk and mainly because there was no real coffee aroma while making which for anyway always start me wanting to enjoy it.

Next the original Flat White which was one of the very early items produced by Nescafe. Again because it’s a single pod the coffee smell is not there but as someone who enjoys cow’s milk the taste was quite acceptable if a little bland and as the name suggests its flat and nearer to white in colour than black.

Before I go on to tell you about my week or so testing the three plant based offering a trawl around the Nescafe site found no less than thirty nine different coffee’s these of course include those drunk black as well as some I have not heard of, I did not include the teas or indeed Nesquik or Chocolate offerings. For those new to a pod machine I see there are several ‘sample’ packs with a range of different pods in a single package.

So now onto the plant based offerings, they all come in 12 pod boxes and are all listed as strength five.

First the Coconut Flat White while being prepared I noticed a distinct coconut smell and when being drunk this was still there to a lesser amount, no real coffee taste for me and while I drank several of them over the testing period it did not do a great deal for me.

Next the Almond Flat White and I did detect a sort of frangipane smell while being prepared and like the coconut above no real coffee taste and while I tested all the items at different times of the day this one always left an after taste in the mouth.

Finally the Oat Flat White this had no bouquet while being prepared apart from steam if that indeed has a bouquet at all. It was the most watery of all for me and left a stain on the cup once emptied which was not so noticeable on the other offerings.

If I had to drink one of the plant based offerings it would be the Coconut offering but only for the fact it at least smelt of coconut.

Most of the larger supermarkets only carry at most around four different coffee pod types so while I have yet to see any of the plant bases offerings in one, you can always get them online from the link below £3.99 all on them in boxes of twelve.