This is certainly a camera small enough to slip into a shirt pocket, however do not let its lack of size make you think it is just another near entry level offering, it has hidden secrets. 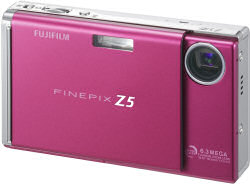 The FinePix Z5 is 9x5.5x2cm maximum measurements. When you zoom in the lens does not move out and the zoom is handled internally working rather like a periscope. The weight even with the metal body is only around 150grams.

This has a solid feel without being heavy. The FujiFilm way of turning on/off is different to others but only people like me need to worry that sliding the lens cover to the right exposes the lens and leaves you ready to start taking pictures. Most other manufacturers have a button on the top to do this. However this does mean that the units lens is always well protected. I wish I could say the same for the TFT as this is totally uncovered and at the mercy of coins or keys. I have a range of bubble wrap bags to protect this vital piece of kit.

By some other manufacturers standards 6.3mega pixels may be sub entry level but the quality of the CCD and the clever extras make it a rather nice unit.

The top has three buttons, the left one to add sound to your shots, the right one switches modes between still and movie while the central one is the shutter release. The left side has no controls while the right side has the anchor point for a wrist strap. The base has an anchor point for a tripod and the charging connector for the solid battery whose door also hides an xD card. This leaves the back that is dominated by the 5x4cm TFT display that works well in all but the strongest sunlight, this is important as there is no viewfinder. To the right of the TFT is the wide/telephoto toggle with three LED's below and below these are four buttons and the five position ubiquitous joystick so a total of nine buttons to control the cameras settings. 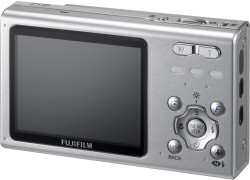 For anyone new to Fuji the 'F' button is the one that sets white balance, xxxx and perhaps most important the quality and size of images. These are shown as 6M F, 6M N, 3:2, 3M, 2M and .3M. The latter being VGA, beside each choice is the number of images you can take with the xD you have inserted. This will be 5 at the 6M F setting on a 16MB card.

Most people know that it is the large retailers who stop manufacturers supplying a decent sized card and a case. Sometimes because they want the edge by supplying one themselves or more normally so they can sell you one at an inflated price. I recently purchased a 512MB xD card for less than £10.

The flash was good at far beyond the 'five foot barrier' of some cameras. You also get anti shake built in - this also works well - and is far more important when taking images over a longer distance. The final extra that is still only on a few cameras is face recognition. This is not - as some people think - like a fingerprint it does not recognise people but should the face move slightly the camera will track it so you still get a perfectly focused image. A look at the second link and then clicking on the 'Discover Face Detection' icon will demonstrate it.

This camera also has 'Blog' mode meaning any image you have taken (at whatever resolution) can be turned into a VGA image on the camera the original image is not touched you just get a 640x480 version ideal for uploading.

Doing my Internet searches found the FujiFilm FinePix Z5 at a best price of £122.55 including delivery from the first link below. It is available in raspberry, brown or silver. Certainly a camera worth putting on your shortlist if you the sort of person who likes to grad a quick snap as the response times are very good.