Twin or Combo both names to denote two and both supplied by Binatone. The first called the Twin Solo Plus which also has an answering machine. The second the Carrera Combo a cordless and a corded phone using one phone line. 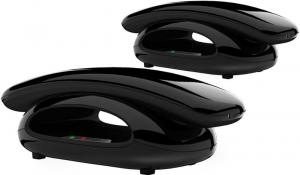 The iDect Solo L1i twin measutes 19x5x2cm and slightly curved so that it fits between ear and mouth – unlike most DECT phones that tend to be straight.

The technology is a revamp of DECT that Binatone have called iDECT. It is stated to work up to 50 metres indoors and up to 300 metres outside. They certainly worked from one side of my property to the other. Outside I was able to go to the bottom of my garden and down the road by around 60metres before the signal broke up.

It has a 3.2x2.2cm display with four well marked buttons around the outside of the ubiquitous five position joystick just below it. Below that four lines of three for the normal phone numbers and * and # keys then the contacts to fit into the dock and finally three further well marked keys. All are well explained in the documentation.

The Solo Plus runs on two rechargeable ‘AAA’ batteries that are stated to last for 13 hours of talk time and up to 230 hours standby, however providing you replace the phone in the dock neither figure should become relevant.

The Solo Plus is sold as a single (around £28) triple version (around £50) and the Twin that I was sent at £30. Certainly for a home with numerous rooms especially over more than one floor having a second phone is not a luxury.

A phone book is something everyone has on their mobile so having one on the landline is a plus this can store up to 100 numbers and entering the first letter of the name can speed up finding a number when you have a lot stored.

The twin version I was sent is available from the link below for £28.14 with free delivery. 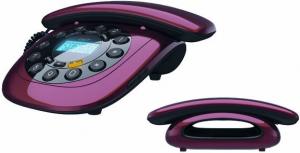 This has look of a retro phone the numerals are spread in a circle like those on the dial phones used to be but these are touch controlled. The central area has a 4x2cm display. There are three touch buttons above and three more below the display. Both the display and the numbers are tastefully backlit.

The corded handset is 20cm long and slightly curved to suit the face better; it is 5cm wide and 1.5cm thick. The phone base 18x14x7cm the last figure is with the handset in place. My unit was a metallic red but I see black is also available.

The iDect unit that goes with it is also the same red colour and is also slightly curved with the buttons and display on the inside.

One big advantage of a corded handset is that in the event of a power cut that can still make calls whereas the cordless handset still requires power so it is always wise to have at least one corded phone available for this purpose.

The Carrera Combo also has an answer machine and you can also control this from the DECT phone there is a 76 page User Guide that explains everything in detail.

So can retro be stylish, I certainly think so with the Carrera Combo. Having the Dect part is useful when you need to be away from the corded room and also the things stated for the unit above apply about distance etc. It is available from the link below for £44.99 with free delivery.

Got this phone and really love the look of it.  However,  I can't find anywhere in the manual and I've tried fiddling with it, where I can record mt own personal greeting.  Does anyone know if I can do this on this model?? Mel