Small, medium, large plus IOS, Android, Windows operating system are just some of the options to be taken into consideration when selecting a smartphone. Check out this model from Samsung. 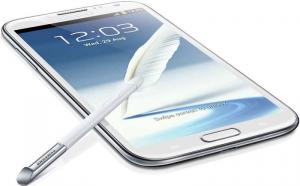 Following the successful release of its Galaxy Note device (around 10 million units already sold), Samsung has now developed the follow up offering.  This product is appropriately entitled Galaxy Note II and it could easily be described as a smartphone on steroids with its dimensions of 151.1 x 80.5 x 9.4mm (H x W x D) and a weight of 183g.

The review model, kindly supplied by Vodafone, is decked out in a lacquered white plastic casing with a metallic silver trim around the edges of the handset.  Dominating the front of the device is an eye-appealing 5.5-inch HD Super AMPLED screen with a resolution of 1280 x 720 pixels.  This screen is both responsive and capable of delivering a bright clear image.  Positioned below the screen is a physical Home button flanked on either side by capacitive Menu and Buck controls that remain invisible until the screen is touched.

Located, about a third of the way down, on the right side of the unit is the power on/off button.  Opposite this button, on the left side, is a volume rocker.  A socket for attaching headphones with a 3.5mm jack can be found on the top of the handset while a microUSB connection is on the base of the unit.  There is also a 1.9MP camera on the front of the Galaxy Note II.

As well as the front-mounted camera, which can be selected from the supplied camera app, there is also the main 8MP camera on the rear of the unit.  While not the fastest camera around, the model supplied with the Galaxy Note II can capture still images and video clips that have crisp and sharp images.  The camera app supports features such as burst mode, self portrait, GPS tagging and capturing images through the use of voice.

The rear of the handset has a rather thin removable cover.  This cover, once it has been removed by a fingernail or sharp object, reveals the battery compartment.  Along with the Li-Ion 3100mAh battery pack, this compartment houses a micro SIM card plus an options microSD card to supplement the unit’s memory up to a maximum of 64GB.

Digging a little deeper, not literally I hasten to add, under the surface, is an Exynos 4412 Quad processor with a maximum speed of 1.6GHz and 2GB of RAM which work together to provide a fast performance from the Android Jelly Bean operating system.  Samsung has included a number of sensors in this device.  The sensors include accelerometer, geo-magnetic, gyro-sensor, light and proximity sensors.

Along with the usual Android apps that we have come to love/hate with the various incarnation of the operating system, Samsung has included several additional offerings that are well worth considering.  These extra items include Flipboard, Learning Hub, Paper Artist and Samsung Apps.

While you can use your finger or thumb to activate and control the features and apps of this device, Samsung has included a stylus which referred to as the S Pen.  This utensil is housed in a slot running up the right side of the Galaxy Note II.  The 11cm stylus comes into its own for drawing and writing tasks when it proves to be an excellent tool.

Samsung has integrated a function known as Air View for use with the stylus.  The Galaxy Note II will recognise the presence of the stylus when it is held about a centimetre above certain items such as menus, folders, etc. being shown on the screen.  You can then examine the content held within that item before making the decision whether to select the item or move on to another option.

When you first lay eyes on the Galaxy Note II you might have some concerns whether its size would make it rather awkward when it was being handled – I know I did.  However it quickly became apparent that my worries were unfounded as I put the Galaxy Note II to work.  For most tasks, this smartphone works best when held in portrait orientation.  In such circumstances I felt the device fitted comfortable in one hand, leaving the other hand free to access the screen.  Generally landscape orientation is used for viewing tasks with the Galaxy Note II laying across one palm.

When not in use, the Galaxy Note II could be more of a problem as it might be too large to fit in some pockets.  In my case it definitely would not fit in the usual pocket I have used for my mobile device.  I had to transfer the Galaxy Note II to one of my other pockets which meant I had to remove some of the other items that usually lived there.

The Samsung Galaxy Note II could well repeat the success of the earlier version of this product.  You get a good range of features from a responsive system that should drawn admiring glances from others.  As mentioned my review sample was supplied by Vodafone who have various contracts available for users.