What do you call a device that combines an external hard disk with an iPod docking station? To answer my own question  the device is called Dualie. 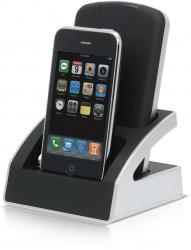 So just what is a Dualie when it is at home?  Developed by Buffalo Technology, the Dualie consists of a brushed aluminium and black docking station with two bays and an external hard disk.  The front bay is used to mount your chosen iPod device while the rear bay is for the supplied 500GB external hard disk.

Measuring 70 x 101 x 96mm (H x W x D), the docking station features the connections for attaching the iPod device and the external hard disk in the appropriate bays.  Adapters are provided for the iPhone 3G/3GS, iPod touch 2nd Generation, iPod Classic and iPod nano 5th Generation.  Located at the rear of the docking station are the ports for USB 2.0 and FireWire 400/800 plus an additional two USB 2.0 ports for attaching flash drives and the like plus a mains power socket.  Included among the supplied leads are those for mains power (both two and three pin plugs), USB and FireWire 6 and 9-pin connectivity.

The disk, as supplied, is pre-formatted for Mac users – which is hardly surprising when you consider the iPod feature.  Windows users will need to carry out a disk format using the instructions supplied on the CD.  While these on-screen instructions are comprehensive with appropriate illustrations, they do require a certain amount of switching to and fro with the formatting settings window.  Novice users could easily become confused when the instructions mention selecting “Delete Volume” yet this option was greyed out and unobtainable when I attempted this action.  Experienced users should have no problems.

With your iPod device docked, the Dualie can charge it and will allow you to sync to your digital collection and other data.  You can play individual tracks using your computer’s speaker system and access any of the content on your iPod from your computer screen.

As Buffalo is regarding the external hard disk as a backup storage facility for use with your iPod, I decided to concentrate my speed testing using MP3 files.  I made up a collection of 775 files spread over 51 folders that consisted on 2.42GB of data.  My first test involved transferring the data to the hard disk while it was mounted on the docking station.  This test took 2 minutes 49 seconds.  I then reran the test using a direct USB 2.0 link to the hard disk without the use of mains power.  The transfer was slightly slower at 2 minutes 52 seconds.  The third and final test again used the direct USB 2.0 link to the hard disk but this time with the mains power lead attached.  This test was completed in 2 minutes 51 seconds.  The timings were so close together that it would make no difference which method was used to transfer data.  A flashing blue light on top of the external hard disk indicates when activity is taking place.

Overall this is an impressive, solid piece of kit which can work with Mac OS 10.4 and later or Windows XP and later.  Transfer speeds are acceptable with the supplied hard drive and you can both recharge and access the content on your iPod device.  However you are paying a premium for the functionality of this device.  You could pick up an external hard drive of similar capacity and an iPod docking station (perhaps with alarm clock and speaker functionality), for approximately half the price being asked for the Dualie which comes with a £199 price tag.

It seems I made a mistake regarding the Firewire capability of this product.  The Firewire connection is only available from the Hard Disk and not from the docking station element.  My apologies for this mistake but it does not affect my scoring for the product.