Recently I was invited to the launch of a new product that was described as a personal sharing device. This was the Leyio PSD. 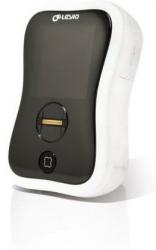 Bluetooth technology has been around for quite a while.  During this period it has allowed us to transmit and share personal data, such as found on a business card, between mobile devices.  Thinking back, I can only remember using this facility on one occasion.  On a similar theme, I recently heard of an event, organised to promote Bluetooth and its functionality, where attendees were busy exchanging traditional business cards rather than making use of the more modern electronic route.  The reason for mentioning these two observations is the arrival of a new product from Leyio.

This is a Personal Sharing Device (PSD) which goes, not unexpectedly, by the name of Leyio PSD.  As its titles implies, this device has been designed to allow users to share and exchange content when away from their computer.  The Leyio PSD is extremely portable being small in size (72 x 50 x 25mm) and is available in a choice of classic black, ice grey or candy pink.

It has a compressed rubber body with sides that taper inwards towards the centre.   Within this body is an Arm EJS 320MHz processor, 3-axis accelerometer with power being provided by a Lithium polymer battery.  Located around the edges of the device are a standard USB port, mini USB connection and a shuttle key.  This latter item is a mini 2GB unit that can be used to transfer specific data to a third-party computer.  The main storage of the Leyio PSD is 16GB that can be used to store data with all standard file types being supported.

The front of the Leyio PSD consists of a 1.5-inch OLED screen, showing 65k colours at 128 x 128-pixel resolution, mounted above a finger-print reader and a button for turning the device on and pairing with another Leyio unit.  You will need to train the Leyio to recognise your finger or thumbprint in order to gain access to the unit.  Generally I achieved around a 50% success rate at gaining access in this way but often had to resort to the provided second method of gaining entry by entering a six-figure PIN number.  You will need to do this if your thumbprint is not recognised after five attempts.  You are meant to be able to change the default PIN number and name assigned to your unit via an online connection.  However I was unable to make any adjustments when I accessed my Leyio account.  I have to say that the Leyio website was not the most user-friendly when I paid a visit.

The Leyio PSD offers four different methods in which data can be transferred between devices.  By far the most innovative method is through the use of Ultra Wide Band (UWB) wireless technology.  This method requires the presence of two Leyio PSD units that need to be temporally paired in order for a transmission to take place.  Pairing just involves holding down a button on both devices when in close proximity.  Instigated by a flick of the wrist or a sweeping motion, which will be detected by the accelerometer, by whoever has the sending device, data can be sent from one device to another.

For optimum performance, the Leyio devices should be less than 5 metres apart although the maximum distance can be up to 10 metres.  The Leyio device vibrates to indicate the start and end of a transfer while the screen shows an egg-timer icon gradually filling up during the process.  Transfer speed will be a respectable 10 Mb/s.  Actually UWB is capable of even higher transmission rates but the Leyio’s write speed acts as a limiter.  In various tests using video and MP3 files, I was able to confirm the data exchange rate.

Of course there will be many occasions when you will want to share content with somebody who does not possess a Leyio PSD or want to transfer data to your computer.  Both these situations have been catered for by the device’s functionality.  When a third-party is involved, they could provide a USB flash drive.  This can be connected to the Leyio and have the data copied to it.  Alternatively you could make use of the Shuttle feature which allows you to copy content to the mini 2GB USB flash drive that forms an integral part of the Leyio.  The data can then be copied to their computer.  For copying data to and from your own computer, you can use the supplied USB lead to attach the Leyio and then use standard Windows protocols for transferring data.  Using this lead will also charge the unit’s internal battery.  It was noticeable that transfer speeds were slower when USB was involved.

Although the Leyio PSD allows for different methods of data transfer and can store a wide variety of content, it only allows you to view still images.  Any other content is only viewable as a file name.  This product’s main selling point will be its use of UWB transfer.  However this requires both parties to have a Leyio.   At the price point being asked for the Leyio PSD, I have doubts as to whether the uptake will be large enough for the device to reach the popularity levels necessary to take advantage of this feature.  In looks and functionality, I have no complaints but I feel that the price point of £159 will put many possible purchasers from taking advantage of this product.

For optimum performance, the Leyio devices should be less than 5 metres apart although the maximum distance can be up to 10 metres. http://www.discount-laptop-battery.co.uk/dell-gk479.htm  The Leyio device vibrates to indicate the start and end of a transfer while the screen shows an egg-timer icon gradually filling up during the process.