The Navigon 2200 and 2210s are slimline 3.5inch screen GPS units which incorporate traffic information (TMC) and text-to-speech. They are identical with the exception that the 2210 maps cover Europe and not just the UK & Ireland. 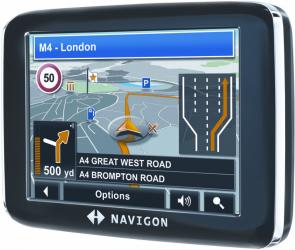 I like the very clear print that is used, under the rolling map display, for the names of the road that one is currently on and the road into which one will next turn. However, it was not really needed most of the time as the voice instructions gives the name of the street into which you should turn. This is particularly valuable as it minimises the chance of taking the wrong turning where there are two in close proximity. In addition, not only was the distance to destination and estimated time of arrival shown, there was a small diagram of each roundabout showing all the exits. It was very useful having this information in advance of arriving at the roundabout as it gives a useful indication as to which lane to use.

“Lane Assistant Pro” guidance is useful for complex situations on major roads. Although I haven’t tried this, it should be an absolute boon on motorways such as the Brussels ring road (which is my personal hate) to ensure that you got into lane in plenty of time to smoothly reach the appropriate exit ramp. This is complemented by the automatic zoom which changes the map scale in accordance with your speed of travel.

There are a number of TMC options including show all traffic information / on route / not on route etc. Tapping on one of the “problems” listed, takes one to a detailed map. Importantly, one can get the unit to recalculate the route so as to by-pass the problem.

As versatile as this GPS unit is, it does not make best use of UK postcodes as, after having entered the postcode, one is not given the option of adding the house number. However, as one would expect, one can enter the destination address as country (2210 only); town; street; and then, finally, the house number. While this is certainly not so convenient as using the full postcode, the situation is slightly eased by the intelligent soft keyboard where letters or numbers which cannot be used at that time are greyed-out.

Overall, I consider it a major disadvantage as inputting the target destination is something that one must do every time one is aiming to go to a new place. Another shortcoming is the lack of reasonably comprehensive instructions in the box. One has to download the full instructions from the Navigon Web site. Putting those issues aside once on the move I found that the guidance generally very easy to follow even though I feel that the speed limit information was sometimes suspect.

At the time of writing, web prices were £89.99 for the 2200 at Halfords and £113.41 for the 2210 from Dabs and from Amazon (including shipping). However, shop around because prices are very volatile at present.

Navigon offers a range of GPS units. There are also the 1200 and 1210 are the basic versions of the 2200 & 2210 respectively but do not include the text-to-speech or the traffic information and, as such, are probably ideal entry point for someone who is not really certain of the value of GPS and just wants to dip their toe in the water.

Very well supported review from both sides of the arguement.

I have one of these myself, and it really did surprise me out of the box. I opened it up to find a lovely device, looks stunning. Plugged it into the car held the power button for 3 secs and on it came. course, it took a while to connect to the satellites on it's first run, but any normal person wouldn't call it much of a wait, as it was only about 5 minutes or less. It generally grabs your position with 2-4 satellites, and this is usually boosted to 9 within a minute or so, making things more accurate. People on certain reviews were saying it is slow. This is not the case, though pressing buttons may be a bit less quick than lightspeed, its not exactly unbearable, you just get very picky people online.

Recalculation is the fastest I've ever seen on any GPS device. A couple of years ago, my uncle's tomtom told us to go over a toll-road twice, rather than going round a round-a-bout for free. Later, a friend of mine's Garmin only kicked in 5 minutes after she had turned back and drove the correct way. This little thing took 5 secs (at the most) to recalculate, and it didn't peep a word, just did it's job and rerouted the whole 5 hour journey in 3 secs. Lane Assist was excellent on the highways, telling us exactly which lane we should be in. Traffic alerts were all over london, luckily we passed london without having to go through, however one alert on the M4 couldn't be recalculated because there were no nearby roads that would make the journey any quicker... common sense really, not failure.

I could say more, but this is supposed to be a comment not a seperate review.
BUY ONE!