The Garmin nüvi 3597LMT is a top of the range satnav providing European coverage. It has a high resolution 5inch display and incorporates a wide range of features aimed at improving navigation and enhancing its usability. 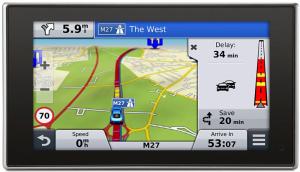 It is roughly 5.5 x 3 x 0.5 inches and is supplied with the necessary cables and a suction mount that can be left permanently on the windscreen. The unit is placed on the mount where it is held in position magnetically and, at the same time, makes the necessary electrical connection. This is far more convenient than the common arrangement where the cable must be plugged each time directly into the satnav unit.

It comes supplied with the European maps already installed so that it is ready to go with the user having the choice of inputting postcode/house number or number/street/town. In order to ensure that it can be kept up to date, free lifetime map updates can be downloaded and installed.  The map data includes an enormous number of useful points of interest.

The Lane Guidance, with voice prompts, is very helpful on motorways and trunk roads and avoids the challenge of getting across traffic lanes just as the exit you need comes rushing up on you. I found that Garmin Real Directions, where turn directions cite landmarks, traffic lights etc., gave added confidence that one was on the right road and helps ensure that, where there are two turnings close together, one takes the correct one.

In the context of ease of use when navigating, having the name of the current street at the bottom of the screen and, at the top of the screen in larger type with a directional symbol, the name of the next street provides useful guidance and complements the moving map on the screen. As the map moves it maintains the vehicle heading and the symbol representing the current location of the moving vehicle remains near the centre of the screen. In addition it provides traffic alerts which give a useful indication of problems on the road and the time delays likely to be experienced together with any possible detours.

The user interface is well designed so that using the wide range of the 3597’s features did not pose any problems. This is despite the fact that the instructions and the on-screen help were somewhat limited. In particular, as an alternative to using the touch screen, I found Voice Command useful in that it enabled one to keep one’s hands on the wheel and eyes on the road. The default opening command is “Voice Command”. This brings up the options on screen which then guide you through your required task. After a very short while, using voice almost becomes second nature. My main problem was that when providing address information I could not find a way of just giving post code and then house number but had to speak the full address in the form of number, street and town.

One of the most useful features was the magnetic mount which enables one to put it in place and remove it with no effort. This, in conjunction with both Bluetooth and Android smartphone compatibility means that it becomes almost as convenient to use as a built-in satnav so that one just becomes second nature to get in the car and use it.

It is a premium satnav with a list price of £269.99 but is available on Amazon for £218.39. Even though there are lesser products around, its performance, its regularly updated maps, and its convenience make it worthy of very serious consideration.