Like many things, as soon as you get away from home the things you take for granted either disappear, or become really expensive. Internet access is just one of those impossibly expensive things that would be incredibly useful on the move. 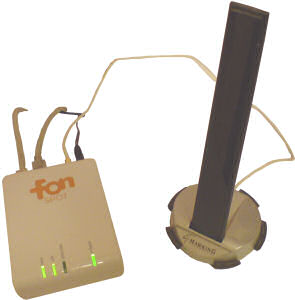 Email is one of those services that we take for granted - almost everyone uses it. On the road though if you want to access email you either have to find an Internet Cafe or pay an exorbitant fee for the privilege, either using a WiFi hot spot or (slowly) via your mobile phone. Most people are reluctant to do either which probably explains the big, expensive White Elephant that 3G has become in the UK.

FON hope to upset the status quo by providing a co-operative, shared WiFi Internet service. The basic principle is to build a shared network of WiFi HotSpots on the back of the multitude of broadband Internet users. Using a special FON box individual broadband users 'share' a little of their bandwidth with others through a public WiFi network. FON are actively working with UK ISPs now to expand their service into the UK, as evidenced by their latest agreement with BT resulting in BTFON

This raises a couple of questions : why would I bother to share my broadband with others ; if I do share my internet connection - how safe is my data ; will my ISP get annoyed with me for doing this!

You buy a special FON box - La Fontera+ which is basically a WiFi router. This plugs into your broadband box (ADSL or cable) via an Ethernet connection and provides a gateway for you and FON guests to share your internet service. The FON then splits your broadband WiFi into two completely separate networks - one that is available to public FON users, and the other private to your household.

La Fontera then acts as your Internet gateway. If you have an all-in-one ADSL WiFi router you'll want to disable WiFi on that box. For most people the FON router does everything you'll need. For those of us with more sophisticated networking requirements it's a bit limited - you can't for example allocate static IP addresses to devices. This product is however based on an Open Source Linux framework though so there's a good chance new features will be added in future.

The FON box has been designed to make sure that traffic can only pass from public/private to the Internet and back. No traffic is allowed to pass from the public network onto your private network. To protect the data each WiFi network has separate encryption keys.

By allowing others to make use of your broadband connection - you gain access to the connections of other FON members, for free. At the moment in the UK this probably isn't a lot of use, but with enough FON members, at least in urban environments, FON should soon be able to provide better WiFi coverage than commercial hot-spot companies, that's in theory at least!. 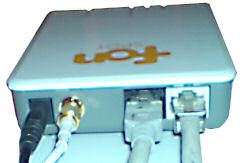 Who can use my FON hotspot?

Other FON members that have an active hot-spot. As part of the agreement with FON you're expected to leave the access point and Internet connection on all the time. They can monitor whether you're actively doing that!

FON also sell what's effectively a 'guest pass' to the FON network. This allows people that don't have a FON hotspot of their own to use the FON access points. At first sight that may seem a little unfair, but FON balance that by offering to share half the revenue from guests that access through your hot-spot. If you do this then you are a 'Fonero'! If you happen to live above a coffee-house that could lead to a reasonable trickle of money, although probably not enough to retire on!

OK - sounds good - what about my ISP?

I raised this question with FON - I do remember some cases in the past where ISPs have frowned upon two neighbours sharing a single broadband connection via WiFi. Not that in practice they could do anything about it, but it was in the T&Cs of some ISPs that this "Is Not Allowed".

For the most part it would seem that the bad old days in ISP paranoia are passing. FON are actively working with ISPs to encourage the adoption of the FON as a way for them to sell more broadband connections : "You want to access your email on the move? Great, buy a broadband contract from us, sign up for the FON service" - the ISP has another signed up customer.

It'll cost you a little to get started. Around ?43.06 to buy what's called La Fontera+, which is the wireless router that you'll need to share your broadband. I have one here and despite having an unusually complex network here (servers, wireless bridges, cable modem) I followed the very simple set-up procedure and hey-presto, I'm submitting this article via my La Fontera.

FON are new to the UK market but was founded two years ago in Spain with Google as one of the original investors. Currently there are 450,000 members of the community. Put another way that's 450,000 WiFi hotspots. There's no reason why that success shouldn't be reproduced in the UK, and with higher population densities it could be more successful, especially in cities. FON provide a GoogleMaps interface to allow you to track down hot-spots at maps.fon.com. A quick check there shows there are already a good number of UK FON spots installed.

One potential problem is with WiFi itself. By default La Fontera+ comes with a pretty low-quality aerial. For anyone that's used WiFi before, you may well have found that getting the signal through one wall is pretty difficult at times. Using a WiFi signal strength meter the signal with default aerial does indeed drop off very quickly.

La Fontera+ does have a standard aerial connection though. Attaching my Hawkings Technology high-gain antenna

I could successfully attach up to 15m away through a garage and several interior walls. At the moment FON are offering a better antenna (La Fontenna of course) for only ?2 when bought with La Fontenna - I'd strongly recommend that just to avoid your own frustration of not getting full speed WiFi or bad reception as you move around the home/garden.

hmmmmmm - and it's a good idea?

I think so. If like me you're frustrated by the lack of a transparent, cost effective mobile solution to Internet access then join the FON club. It'll only work if enough people sign up though, but think about the alternatives - for the one-off ?43 of La Fontera - how much paid mobile access could you buy?

For the initial few of course - you have a put a little faith into the thing growing.

I'd recommend checking with your ISPs terms and conditions though - if they say it's not allowed change ISP!

This product was very close to achieving a GadgetSpeak 5x5 award. I marked it down on features because for some people La Fontera won't be able to completely replace your WiFi router, and for value because it's new and you're taking a bit of a gamble on it being widely adopted in the UK.

For full details of the product check check the FON website.

La Fontera is available directly from FON in Euros, or from Amazon for £24.99 :

Thanks for the very helpful article.
I found a big list of funny wifi names after setting my wifi hotspot, you can check: https://wifipuns.com
Rating:

I'm in Soho London.  I paid 15 pounds for 5 days internet connection on the FON service and have had nothing but trouble with it.  Some days I can't get connected at all.  Sometimes I can but get dropped and can/can't get back on.  Sometimes I can get back on to send emails but cannot reconnect to Skype.  It's too flaky for me.  I would not recommend it.