Not just another thin notebook - it is very thin  but this has a far bigger selling point. Simple figures, initial boot time 70 seconds, initial shutdown time 25 seconds, once the 16GB SSD second drive gets to work boot is 20 seconds and shutdown 10 seconds 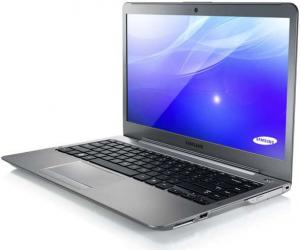 I have not reviewed any other Windows notebook that boots in 20seconds and 10seconds shutdown is also rapid. However before the first set of updates and changing the way Samsung send in their products to go to Standby rather than Shutdown the story was very different 70 seconds to boot and 25 seconds for it to shut down.

It weights 1740 grams and measures 33x22.5x2cm. It is a lovely grey colour everywhere – meaning no fingermarks that show – even the screen surround which of course is the place you notice the fingermarks the most.

The left side has the DC input, Ethernet port, two USB3 ports, VGA out, HDMI out and 3.5mm headset connection. The front has four pin hole LEDs and as it is half the thickness of the back nothing else. The right side has a four in one card port a USB 2 port and the smallest DVD drive I have seen with only the back 7cm looking like a DVD drive until you press the button to open it, very skilful design. This also applies to the Ethernet port on the left side which flips open at the bottom to support the full size of the Ethernet cable.

The viewable screen is 31x17.5cm which gives the imperial diagonal measurement of 14inches. The screen resolution is 1366x768 and has clear, crisp and sharp text with the colour range sharp so watching a movie or three is fine.

There is a 87key keyboard with all the alpha and numeric keys being full size. The keyboard is set in by 1.5cm from each side and 3.5cm from the rear. The area behind the keyboard has the on/off button and speakers which give a perfectly acceptable sound. In front of the keyboard is a 8cm strip with the 10x7cm trackpad mounted 9cm from the left and 14cm from the right side. The web cam and microphone are mounted in the top centre of the screen surround.

The stated hard disc size is 500MB – quite small by recent standards – and you have 406GB free of the 442GB that is available. You need to nose deeper to find the inbuilt 16GB SSD drive that speeds things up considerably.

I am aware that all computers are sent out updated to a point, the initial 45 updates, were followed a few days later by 8 more and then in the last week of my review a further 8 updates. The Windows Experience improved by .3 to both the Graphic measures during the review so at least one of the updates had to affect these scores.

The processor is Intel Core i5 2467M running at 1.6GHz. It has 4GB of RAM and is running Windows 7 Home Premium 64bit Edition.

The other software pre installed is Cyberlink Media Suite as well as their You Cam software giving you that as a use for the built in WebCam as well as Skype. A range of extra game trials from Wild Tangent, while on trials you get the normal Norton Backup and Internet Security. Samsung have a range of their own applets to help.

While this may seem like a unit little more than a Netbook I found it worked well and was more than happy with it. You can start working as soon as the Desktop appears and everything I tested with it worked fine. While it may seem small I am sure the built in SSD makes a big difference and not just to the booting and shutdown times.

But something must be added about this notebook:
+ lcd's hinge is plastic.. it'll break! (I have seen a lot of this!)

+ network (ethernet) port also features in plastic, will also break if you use it!!