A powerful notebook with lots of memory and joy of joys no shiny black in sight anywhere as the whole thing is silver grey. The screen is of course reflective but not nearly as much as a lot of other offerings I have used. 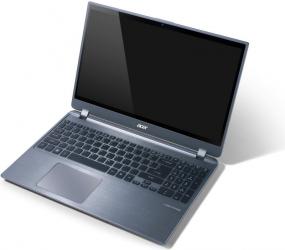 This is an Intel Core i5 unit with a 500GB hard disc and a small SSD that helps make things quite a bit quicker in starting.

It is 36x25x2cm and it weights 2.175kilos. The unit feels really sturdy probably because the screen back is aluminium.

You will note from the dimensions that there is no increase in size towards the back – normally caused by an oversize battery. Often the screen is cut tight to the rear and this means that all the connections need to be on the sides, not here as the back has all the connections apart from the left side that has the DC input and the DVD drive, the front has the on/off button and a couple of LEDs, while the right side has earbud socket and SD card port.

On the back are three USB ports two and USB3 and one USB2, there is also an Ethernet port and finally an HDMI out.

It has a small SSD as well as the 447GB hard disc. The former is the reason that boot is less than 30seconds and shutdown only 15seconds.

Battery life for ‘normal’ use should be around five hours. I managed to watch two hours of HD TV via iPlayer on a single charge which is by anyone’s calculations ‘extreme’ use. Light use should get close to a day.

It has a 104 key keyboard with all apart from the function keys being full size. During bootup the keyboard lights up. There is a 3cm strip behind the keyboard and 11cm strip in front, the trackpad is 7.5cm from left and 17.5cm from the right, it is 10.5x8cm and the mouse keys are an invisible part of the trackpad at the front edge.

It is difficult to say what software is available as Acer tend to send units direct from one reviewer to the next. Windows 7 Home Premium 64 bit version, the normal McAfee and Norton trials and a range of 60 minute trials of various games. I am fairly certain that Clear.Fi media and Clear.Fi photo are also supplied as well as software badged Acer for the Webcam and various other Acer applets.

The SSD is obviously helpful with booting and the battery life is adequate with care for a days use. It’s nice not to have protrusions at the back as manufacturers put oversize batteries in to try to give added performance. The brushed metal finish means although your fingermarks are still there they do not appear to show.

On the down side the screen is still very reflective, why cannot a non reflective screen be standard on all notebooks.

I liked this notebook but as always the review period is short and doing a great deal more than a standard set of tests is not possible.

The Acer Aspire Timeline M5-581TG is available from the link below for £738.73 with free delivery.

Full details can be found on the Acer web-site