A four letter acronym often heard with respect to computers is KISS -- Keep It Simple, Stupid. Homekey from Simplicity Computers follows this precept and actually provides a simple and easy-to-learn jargon-free approach to being able to send/receive emails, surf the web and doing other PC-related tasks. Furthermore, it does this without our needing to invest in the latest expensive technology. 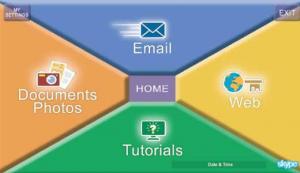 In developing this product, Simplicity has concentrated on people’s needs rather than the means. Everything is on its Homekey which is a 16GB memory stick which plugs into a USB port on an existing desktop or laptop PC (not a Mac). It then enables users to lose their fear of PCs and carry out many of those tasks which so many of us just take for granted. These include writing documents, emailing, using the Web for research, examining, editing and printing their photos as well as keeping in touch with friends and relatives around the world using Skype.

In operation, the user first of all sees a large “envelope” on the computer screen with keywords: Email, Web, Documents Photos, and Tutorials. In the centre there is also the single word Home.

It is a simple task to use the mouse to select the particular task such as, for example, email. As one steers the cursor to the appropriate area on the screen and clicks the mouse button, the opening screen disappears to be replaced by one relating to the specific task in hand. In this case, one is then offered the choice of reading emails, writing emails, address book and, yet again, tutorials. This is typical of the straightforward jargon-free approach adopted which will make it easy for the newbie to actually get results.

When users gain more experience and confidence, they can change from beginner to advanced settings. This takes them to more sophisticated applications such as the word processor which forms part of the Linux version of OpenOffice which is also on the Homekey stick.

Documentation provided is a 16-page Getting Started guide plus tutorials on-screen and in the form of a 64-page booklet. Both paper guides are A4 in size and are nicely printed on good quality paper in a jargon-free style.

The simple and direct approach adopted by Simplicity with Homekey will appeal to many people, especially the elderly, who have been deterred by the complexity of the normal PC. I found that, after a few minutes guidance, an elderly lady (a self-confessed Luddite) managed to send her first email. Now she has overcome her fear of the unknown, she will want to use the Homekey in earnest.

The Simplicity Homekey is priced at £69.95 or £89.95, including 7 days “setup support (plus, in both cases, £6.95 p&p) from www.simplicitycomputers.co.uk.  As the support charge is relatively small, it can be seen that Simplicity does not expect people to have major installation and setup problems. This is borne out by my own experience with installing it on an 8-year old laptop.

Looks like a good idea. I gave my pops a laptop that he no longer uses, I wonder if this could be the answer.
Rating:

Yes indeed.  The Homekey is unbelievably easy to use and I'd recommend it for anyone, not just older people.  Most of us dont need all the stuff Microsoft provides.