With the large number of pocket sized hard drives on the market it is difficult for the user to choose which set of features is most suitable for them and is thus, as far as they are concerned, the best buy. The Buffalo MiniStation will probably press the right buttons for many people. 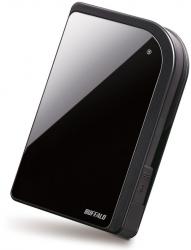 No matter how good the performance, it is convenience and practicality that are key factors in determining whether a device will be used regularly. A good starting point for the MiniStation is that it is USB powered and that the 150mm long flat USB cable, just long enough to connect to your laptop, is permanently attached and so cannot be mislaid. When not in use it neatly docks tidily in the side of the drive. In addition, there is the bundled software.

Although there are smaller and lighter units around, at a weight of 225gm and dimensions of 135 x 90 x 20mm, this shock resistant unit will go comfortably into one’s computer bag, briefcase or suitcase and is offered in three capacities: 250, 320 and 500GB; and three colours black, white and red.

The MiniStation can just be plugged into a USB2 port and files saved to it without any bother as Windows Explorer sees it as another drive. As supplied its format is FAT32 which limits file size to 4GB so, if you want to work with larger files, it must reformatted to NTFS.

During the installation process encryption software is installed and the user is warned of the disastrous effect of losing one’s password although, however, a password is not mandatory. Although, in the event of losing the password, one can restore it to the factory defaults, all one’s data would be lost.

The Turbo USB software will increase the data transfer speed. A test file of over 700MB, which previously took about 35 seconds to write, then only took around a satisfactory 25 seconds so it can be seen that the performance is also not lacking.

MemeoAutoSync, which is also bundled, is for synchronising between any pairs of folders on the computer, USB drives, local hard drives or even network drives. It enables new and updated files are automatically copied in both direction. As soon as the second drive is connected changes are updated and tracked. One initially installs the 30-day free trial version and then enters the provided product key. Google’s Picasa, is, by the way, also bundled.

As 250GB USB hard drives can be found on Amazon for less than £50, it must be appreciated that a 250GB Buffalo MiniStation (Amazon £68.46) is a premium product. For this you get a stylish, shock-resistant drive with the bundled software.