Speakers For The Desktop

Verbatim and Genius have both introduced mid-range mains operated speakers. While the Verbatim Multimedia Audio Bar is an innovative and yet practical design for a 2.1 speaker system with a built-in microphone, the Genius SP-J330 Elegant 2.0CH Multimedia Speaker set is an attractive conventional 2.0 system. 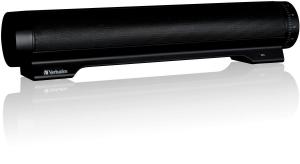 Overall, the Verbatim system consists of a black cylinder which sits just in front of the monitor without seeming to intrude on one's workspace and is thus conveniently located for any number of purposes ranging from listening to music to using Skype.

Roughly 37cm long (approximately the width of a 17inch LCD panel) and 6cm in diameter with the forward-facing portion being a metal mesh, it sits on feet about 1cm high that raise it above the level of the monitor stand so enabling it to be located close to the monitor. Its volume control on/off switch is a full diameter wheel at the right hand end of the unit. Audio line-in and microphone leads emerge from the rear near to the control. They have the normal pink and green colour coding so it is a simple task to connect them to the PC.

Close by are the sockets for the mains power adapter lead and the auxiliary input for an MP3 player or other source. (A 1.5metre long cable, with 3.5mm plugs, for this purpose is in the box.) The microphone socket is at the lower front, also on the right hand end while, just underneath the volume control, is a standard 3.5mm headphone jack. Although the review unit was supplied with a continental power unit and UK mains plug adapter, I've been assured that they now have the correct mains unit.

Within the cylinder are two satellite 30 x 70mm speakers and the woofer giving, overall, a 120Hz to 20kHz frequency response. Although the speakers are magnetically shielded this is less importance these days as an increasing proportion of users are moving away from CRTs and onto LCD panels. The audio specification states that total power output is 8W RMS. Although I have no way of knowing whether this figure is accurate, I found that I very rarely had the volume set at more than the 50 per cent level.

The tone and sound quality appeared more than adequate for general use and the fact that the unit sits there unobtrusively and does not appear to clutter up one's desk is definitely a bonus.

However, for those who want reasonable sound and yet want to keep it simple, the Genius SP-J330 2.0CH Multimedia Speaker set could well be the ideal solution. In fact, the hardest part of getting them working was removing the packing material and untwisting the leads.

They have a claimed frequency response of 30Hz to 20kHz and an output power of 8W total. With the exception that the right hand one has the tone, 3D and volume-on/off controls as well as the power-on LED, the two units appear identical and are roughly 75 x 70 x 190 mm tall.. The RH unit also has 3.5mm sockets for headphones and auxiliary input such as MP3 player.

The units are finished in black – gloss to the front and matt to the rear – while the speaker grills are of grey cloth mesh. The mains cable and audio cable, fitted with a colour-coded 3.5mm plugs, are attached to the left and right hand speaker units respectively. They are roughly 1metre long as is the cable which links the two units.

The style of Verbatim’s Audio Bar, and the convenience of the built-in microphone, could well appeal to many even at an RRP of £49.99 (even though it can be found for less than £40). On the other hand, at a list price of £24.99 (and expected to have a street price of about £20) the Genius will be a popular choice.