Technology is making great inroads into all forms of education. Traditional methods of gaining information and storing content are being superseded by the Internet and computers. 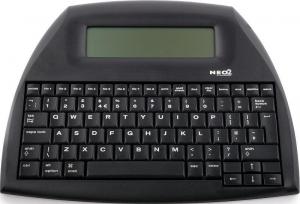 Some may remember that a number of months ago I looked at a product designed for use within educational establishments.  This product, from AlphaSmart, was entitled Neo (you can read my review of the original here).  The Neo, for those who missed my original review, is a lightweight unit that brings together the functionality of a portable word processing, including KAZ Typing Tutor, with features such as USB and Infrared connectivity along with a six-function calculator.  Showing how quickly technology progresses, especially with users demanding more functionality, AlphaSmart has now come up with an enhanced version of the product which, not surprisingly, bears the title of Neo 2.

On the surface the basic Neo 2 is remarkably similar to the original Neo – almost a clone in fact.  The appearance of this lid-less, one-piece device with its weight of 0.91kg (including batteries) is almost identical.  I say “almost” because the latest version of the product bears a Neo 2 logo.  As before you have a QWERTY style keyboard with an additional row of keys, about which I will return to a little later, and a monochrome LCD that can display between 2 and 6 lines of text depending upon the font size.

Power, as I indicated earlier, comes from batteries.  The three AA batteries supplied with the device should give up to 800 hours of use.  Pressing the On/Off key located on the top left of the keyboard, where I would normally expect the ESC key to be (the ESC key has been located on the right side of the space bar where it could easily be pressed by accident), gives you almost instantaneous access to the Neo 2 functionality.

Work is automatically saved and you can quickly switch between eight files at the press of a specific key.  These eight keys form a major part of the additional row of keys mentioned earlier.  Other keys in this row allow for work to be sent to a printer; run a spell check; search for specific words; send content to a suitable computer; and access various applets.

So what, you may think, are the enhancements that justify this device being named Neo 2?  For a start, AlphaSmart has doubled the amount of Flash memory in the Neo 2.  You can now store up to 200 A4 pages of text which should be more than sufficient especially as it is easy to copy files to a computer.  When communicating with other devices, the Neo 2 offers a choice of USB, Infrared and wireless technology.  When set up correctly, the Neo 2 can link to a printer or computer via any of the previously mentioned methods.  Generally the Neo will look first for a USB link before checking on Infrared and then a wireless connection.

Providing the wireless connectivity is a Renaissance Receiver unit.  This device connects to a PC via USB.  While the Renaissance Receiver was accepted when connected direct to my computer, the operating system (Windows XP SP2) failed to recognise and install this device when a powered hub formed part of the connection.

Taking advantage of the wireless feature are three software applications.  AlphaSmart Manager 2 is concerned with the functionality of the Neo 2 and includes the wireless drivers and software.  2Know! Toolbar, offering a console style interface, provides the means to accept responses, such as answers to quiz questions, and correlates the results.  Finally AccelTest can be used to create quizzes and gives access to a resource of content including KS3 Maths SATS questions.  These software items are available for downloading with the total download being 270MB.

Basically the Neo 2 is a fairly sturdy, portable word processor with various connectivity options.  It should not be regarded as a replacement for a full-featured notebook.  AlphaSmart has a range of accessories and solutions for use within the classroom.  A single Neo 2 unit has been priced at £228.85.

I love this little gadget. One of my chief joys in life is writing, but having severe ADD ( and no hope of out-growing it now, as I just celebrated my 26th birthday) makes writing on a computer almost an impossibility for me. As anyone who knows ADD knows, having ADD can often mean you have tons of creativity, but have trouble with expressing that creativity. There is nothing like an internet-connected computers to  emphasize the ADD mind; there is always another link to follow, game to play, or font to mess with.

For me, the answer has been the NEO 2. While it may look almost identical to the first NEO, it is more like the Alphasmart 3000 (the NEO's predecessor) in that it does not offer distracting Palm OS abilities. It's focus is writing (with some other programs you can download if you are a student or teacher for math). All I use it for is writing, and I'll tell you, in the little time I've owned it, I've written more then I have in, well, months together. It's got 8 'main' files, but you can save and name separate files within the files, and, this is very simple to use. Even someone who doesn't do well on computers will do fine on this after a little learning curve.

For those who have the Alphasmart 3000, and looking upgrade, this is better in all the right ways, without ruining the idea, as the first NEO almost did. The screen is a little bit bigger, the keys still "clicky" but easier to push, it looks less like a toy, and it's got much more space. You can change the font size--I made it smaller, so I can see more of what I've written--, name files, find out how much space you have left and how much you've written. It's fantastic.

A true miracle for someone like me who is honestly almost handicapped by ADD, not that won't be great for anyone else who just wants to write and not fuss with computers. Plus, this is a tough little machine. It's surviving my three-year-old admirably.

The two AA batteries that power it last somewhere around 500 hours, which means you can take this anywhere--on planes, on trips, outside, anywhere. Each of the 8 files now hold about 25 pages of information (this is 25 pages of Times New Roman, size 12 font, typed). You can password protect, or even change the way it turns off-on so that it's less likely for it to get turned on accidently (or by a three-year-old who puts Curious George to shame).

In any case, I think this wonderful. It's been wonderful for me.