Type it and Skype it

Continuing to push the boundaries of keyboard/mouse functionality, Logitech has come up with a VoIP enhancement. 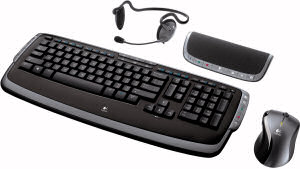 It was an easy call to select the next item for review.  Actually it was a Logitech EasyCall Desktop set that was to become the centre of attention.  The desktop element of this particular product's title refers to the keyboard and optical mouse while the EasyCall appendage relates to a module which combines a wireless receiver unit and speakerphone.  A headset and sixty minutes of free international calls via Skype are included in this package.

The keyboard provided with this kit is certainly stylish.  Logitech has encased the main keyboard layout in a compressed rubberised, black material.  It is then finished off with a grey trim that houses some extra controls for accessing specific features.  Slightly smaller than the normal keyboard, although you do get a larger wrist rest area, this Logitech offering manages to pack in enough features to keep most users happy.

All the function keys, about half the usual size, have a dual purpose with the alternative (represented by a blue coloured icon) able to be reprogrammed using the supplied SetPoint utility.  There are specific buttons on the main layout to lower/raise/mute audio; send emails; search for information; and access the designated Home Internet page plus a button to check on battery status.  Additional buttons, located on either side of the keyboard, let you manage your digital music and communicate via VoIP with Skype being the default method.

I have a slight concern regarding the positioning of these additional buttons as I have a habit of picking up the keyboard to move to another location.  After all this is a wireless device and should encourage such freedom.  However with this keyboard it proved to be rather difficult to pick up without activating one of the features such as running my MP3 software or loading Skype.  In fact any attempt to move the keyboard often resulted in one of these actions being performed automatically.

The mouse supplied with this desktop set is the Logitech MX 600 Laser Cordless Optical model.  This grey and black unit has a slight twisted shape and has been designed primarily for the right handed user.  The standard two buttons and wheel with tilt combination are supplemented by backward/forward buttons and a zoom facility.

The third, and probably defining, element of this kit is the speakerphone unit.  This is a full-duplex device that acts as the control centre for any VoIP activity.  Built into this unit is Logitech's RightSound Technology which has been developed to remove echoes and ambient noise from any communication transmissions.  Situated on the front of the speakerphone are controls to start and end calls plus adjust the volume level.  As mentioned earlier this device doubles as the wireless receiver unit.

Setting up the EasyCall Desktop kit could not be easier.  You insert the supplied batteries into the keyboard and mouse; attach the supplied headset into sockets on the speakerphone unit; and then connect the speakerphone to a spare USB port.  Windows XP will recognise the device and set up the necessary drivers.  You can then install the SetPoint software that includes the functionality to customise the mouse and keyboard features.  A wizard will lead you through the process of adjusting the volume level for the speakerphone and headset.

Price wise, the EasyCall Desktop might seem rather high at £89.99 (shopping around will find it considerably cheaper) but you have to put this figure in context to the functionality the product offers.  The keyboard is stylish with plenty of additional keys covering aspects of digital music, email and VoIP communications.  A single button press is all that is required to fire up your MP3 software; cycle through tracks; adjust volume levels; and activate Skype with speed dialling capabilities.  The Laser optical mouse has a range of programmable buttons that are ideally placed for the right handed user while the innovative wireless receiver speakerphone will add the icing to the cake for regular VoIP enthusiasts.  You will require Windows XP or Vista to gain the full benefit of this desktop set.  I just wish the side-mounted controls did not get in the way whenever I moved the keyboard.

I had one of those IBM keyboards - excellent. Not being a touch typist you could hear me pounding the keys clear across the office! It was already a few years old when I got it - I've never found a better keyboard and really wish I'd brought it with me when I left the company. No one else wanted it so it probably went into a skip :-(
Rating:

Good review, thanks, would like to find one near me to try the keyboard out - I find keyboards so important, being a touch typist, and have today been into PC World (that's all I have near to me!) and all boxes sealed, but found a very nice guy to open them for me to try, and didn't really like any, please bring back the old IBM keyboards, still reckon they were the best.....