Two rather different products the first for DIY fans that can save expensive redecoration bills as you can get an expect finish via good preparation. The second a tool that could save you a very expensive visit from a plumber. 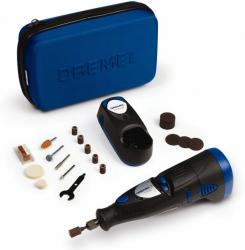 It is described as a cordless multitool, at a maximum dimension of 17x6.5x4.5cm and weighting 294grams without any attachments.

There are a total of 33 pieces all supplied in one bag. The tool, the charger and the accessories come in a single zip up holder. The base of the tool unclips to allow it to sit in the 13amp charger module to recharge the Lithium battery. The top of the unit has a two speed setting ‘hi’ on the left and ‘lo’ on the right. If you add the shaft lock button on top of the unit that is all the controls.

The question is should you describe this as a hobbyist tool – as are a lot of the Dremel items – or a DIY tool to get into those hard to access places that other tools will not. This has been puzzling me for several months hence the delay in producing this article. I think after several jobs I come down on the side of it being a DIY tool.

There are two items of documentation a sheet describing most of the Dremel range and the second Original Instruction with page 1 to 11 in English.

The test I found doing various DIY jobs in the three months I have used it, did it do jobs better than other tools I had accumulated over the last 60 odd years and in most cases the answer was yes. Certainly I had nothing that could get into the confined space to remove rust from areas of a window frame before I repainted.

The weight is towards the back (where the battery is) and therefore you hold it at the rear, the front where the various tools fit is only a centimetre across which immediately opens up otherwise closed spaces for other larger tools.

So it drills, polishes, sands, wire-brushes and more all using the same tool, the main advantages no lead and its small size.

Doing my Internet searches found the Dremel 7700 at a best price of £44.99 including free delivery from the first link below.

This is from a company that advertises on TV and no doubt you will have seen it advertised. My task is tell you if it works. The short answer is yes.

I suspect it originated in the USA simply because the bath is called a tub. I also suspect that the main users will be ladies as most men would tackle the problem from the other end by removing the bung and then poking a screwdriver or other such object upwards.

However I do have a slow running basin in the bathroom and once I had used the Turbo Snake it runs away a lot quicker so again it does its job. It is not designed for kitchen sinks which will probably be clogged by grease and fat whereas the bathroom basin is far more likely to be clogged by hair, this is unclogs with in a simple process.

Available for a range of high street stores or online. The link below has it for £5.95 with free p&p.