Another rather nice 32inch Digital TV this one from LG. Called scarlet simply because the back of the unit is err scarlet. It has an intriguing hole below the screen but above the stand, place your finger in it and it turns the unit on/off from/to standby. 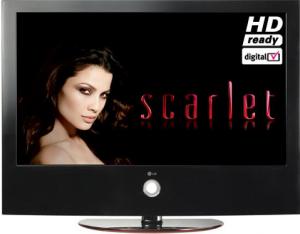 What I received was the TV with mains lead, its stand that screws into the TV, the remote control and nothing else. So everything I am telling you about has been by experimentation as it had no instructions. Later I was sent a PDF file, I find searching through 140 pages of a manual designed for 12 different models not that easy, especially when the TV is in a different room to the PC. I printed only a couple of pages; you of course will have the printed manual when you buy a unit.

There were only two items that I could not easily work out without the manual. The first was that Analogue channels were stored in channel found order and not the normal BBC 1, BBC 2 etc order. The second the red and white lights that show by default all the time the TV is on (red only in standby) in the ‘intriguing hole’. Both these were solved quickly although as it has no on/off switch (only standby) with it turned off you never know when it’s in standby. As I use a gang socket on the carpet in front of the TV for my test units I know by seeing if the plug is inserted, but this is hardly convenient for a permanent solution.

The screen is 81x56x7cm, it comes with a chromium stand and fittings that raise it a few centimetres. The actual screen dimensions are 70x39cm giving the notional 32inch diagonal measurement.

On first look there are no controls on the face or the sides, the ‘intriguing hole’ does turn it on or return it to standby. However on very close inspection there are seven tiny buttons on the right side close cut behind the frame. All the connections are on the back in the bottom left apart from three items on the left side nearby. All are well marked in situ and in the manual.

The picture quality was good and this unit has a light sensor that changes the image brightness/contrast according to the ambient light, this seems to work well. My TV area is normal kept well shaded but I turned lights on and even opened curtains to test this feature.

As with most modern TV’s you can spend hours in the menus as of course they are far more than just a basic TV. Plug in your aerial and switch on, I suspect on a new unit channel tuning will start automatically but if not navigate via the remote using the menu button. It does both the analogue and digital tuning in one process for me this was five analogue channels plus my video recorder and then 65 digital TV channels and 28 radio channels. Unlike other recent TV’s this does not actually have a separate Digital/Analogue button. This is not actually a problem just different, once in say analogue mode use the program increase/decrease button to move easily through the channels. If in Digital this works just the same, moving from one to the other requires a little concentration but it is easy enough, you do however lose the instantaneous switch that a dedicated remote button would give.

The remote has 38 keys plus the ubiquitous five position joystick. The analogue Teletext is by far the best I have seen with all the pages read into memory and so should you want say sub page 12 of 17 and it is currently showing page 15 you can quickly use the joystick keys to move back.

It has four HDMI slots as well as optical, digital and component, two SCART and even RGB for a PC as well as a USB so you can even show your photos on the TV. I see the Plasma models support S-Video but the LCD models do not, the manual – even in PDF form – does have its use, the maximum display size is 1920x1080 on the 32inch model.

The most unusual thing apart from the ‘intriguing hole’ and the scarlet back colour is the ability to change resolution according to the ambient light. However for a full list of the numerous features then refer to the website shown at the end of the review.

Doing my Internet searches found the 32LG6000 at a best price of £444.49, including shipping from the first link below.