Healthier chips with the Tefal Actifry

In these days of healthy eating, we have all been made aware that chips are loaded with oil and are not good for us. However, the Tefal Actifry which is claimed to only need 14ml of oil to fry 1kg of chips changes all that. After all, less than 2% fat is pretty good.

£134 from Amazon
Including shipping 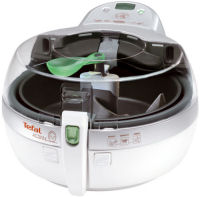 Furthermore, another issue is that frying is one of the most dangerous activities that can be carried out in the kitchen. Don't forget that an open pan of oil on the stove is a major fire hazard while even a thermostatically controlled chip man contains more than enough oil to give terrible burns.

In operation, chips (or whatever else one wants to fry) are placed in the 25cm diameter pan in which there is a rotor arm, the small amount of oil is drizzled on them, the clear perspex lid closed, and the Actifry switched on. There is no time wasted in pre-heating. The chips are churned over by the slowly turning rotor so that they get evenly cooked. There is a built-in timer, but it is just that so one has to be on-hand to switch the machine off.

The maximum recommended chip size is 9cm long by 13mm x 13mm with the instruction guide pointing out that the thinner the chips "the more crunchy they will be". It suggests cooking times of about 40/45 minutes for 1kg of freshly cut chips down to 24/26 minutes for 250g with added oil being 1 spoon (14ml) and quarter-spoon respectively.

In practice, I found that slightly longer cooking times were required. In addition, being sceptical about the recommended quantities of oil, I added more with my first attempt which was with 250g. The results were better when I followed their recommendation. If one wants to take a sample chip, the power is cut off while the lid is lifted.

The guide also gives recommendations for frozen chips, chicken drumsticks and a range of other items. In addition, there is a 60 page recipe book which also has guidance on cooking a variety of foods and suggestions for healthy eating.

The Actifry is ideal for those who like their cooking to be "cut-and-dried" as one can follow the instructions and get consistent results. Furthermore, as long as one is not using strongly flavoured oils or ingredients, it probably only needs a quick wipe over with a piece of kitchen roll after use -- ideal for both the bachelor and the busy mum.

Being roughly 30cm in diameter with a further large extension to the rear to accommodate the heater etc, it does, however, take up a fair amount of workspace. Consequently, the Actifry only comes into its own if one has a fairly large kitchen and is going to use it regularly.

The Actifry is available for £134 including delivery from Amazon.

The Actifry is available for €179,90 including delivery from Amazon.

My wife bought us a Tefal Actifry in May, and urged me to submit a review.  I waited to do so until I'd really got to know the gadget.  I find it extremely useful and effective.  Some complain that it takes too long to cook chips.  If you're the sort that will suddenly want egg and chips in ten minutes, it does.  If you're like me, and take time cooking planned meals, it's ideal.  There's nothing better than being able to put on your chips forty minutes before serving-up time, and to be able to forget about them.  Good chips they are too.  One minor complaint: not enough recipes are available.  Tefal should sponor a website on which recipes can be posted.  Here's one to begin with, for Chinese crispy noodles.  Take about a pound of dried fine wheat-flour noodles and boil them briefly in lots of lightly salted water until they are just flexible (the ones I use take about a minute for this).  Strain them, wash them well in cold water, and immerse in cold water until ready.  Then strain them thoroughly again, shake to release drips, and dry with paper towels.  Put them into actifry, drizzle with one measuring spoon of oil, and cook for fifteen to twenty minutes.  Open up the machine every five minutes or so and, with chopsticks, tease out tangles.  They are ready when they begin to go brown. Serve with any stir-fry topping.