A look at a complete wireless system from Sonos for wirelessly piping music digital audio anywhere and everywhere in your home - including several places at the same time.

If like me you've taken the trouble over the years to rip the bulk of your CD collection onto your PC you can be left with wondering how to then play that music. Yes - you can download to an MP3 player and wander round like a zombie oblivious to the rest of the world. Actually though the old fashioned idea of a good hi-fi with clear amplified and excellent speakers would be very nice.

Sonos have a solution. Of course, this being the twenty-first century it does a lot more besides emulating your old 80s stereo.

The Sonos Digital Music System comprises a number of specialised components. You can buy those components you actually need for your environment and you can buy more components as your requirements change. You can also buy a 'bundle' that gives you the main elements that most people will require.

In our case we're reviewing one such bundle - the "Bundle 130" that comprises a Zone Player 100, a Zone Player 80 and a Sonos Controller. Each of these can communicate wirelessly with each other, or over a wired Ethernet connection.

The various components of the Sonos system communicate with each other over a private wireless network that effectively excludes your computer - which of course is the source of your music. The connection to your home network is wired - via Ethernet. All of the components of the system have Ethernet ports so it doesn't matter which box you choose to connect into your home network - but you must choose at least one!

If, like us, your router is somewhere you really don't want music then there's a component just for you called a ZoneBridge. Plug this into your Router and it forms the base of your Sonos wireless network. The ZoneBridge is not included in the bundle.

Why create their own network? My guess is simplicity. Assuming you've encrypted your wireless network (you have - haven't you?) then you'd require some interface to enter the keys into each Sonos device on the network - a difficult, frustrating and error-prone activity.

When you open the various component boxes of the Sonos system you're presented with an initially bewildering array of cables and connectors. Sitting down with the manual and planning how you're going to use the various components and which of the cables you need will be time well spent.

A 'Zone' is any place where you'd like to play your music. Each Zone will require a 'zone player' - several are available and I'll come onto those in a little while. You can choose which music you'd like to play in each zone. The system supports a maximum of 32 zones - which in terms of cost of player would be substantial, but then if your house is big enough for 32 zones...

One of my favourite features of the Sonos system is the ability link zones together into groups. You then play the audio through the combined group. For most of us that means you can listen to the same music over the whole of your house. For those with 32 zones - you could have one audio stream in the east wing and another in the west!. Impressively Sonos carefully controls the audio so that all of the zones in the group are perfectly synchronised - you can stand in a doorway with a zone in each room and not detect any delay or echo effect with the audio. 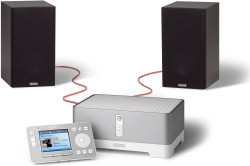 There are currently two units available - the ZonePlayer 100 and the 80 (ZP100 and ZP80). Both have the same minimal controls on the front - volume up/down and mute. The bundle we're using includes one of each. The ZonePlayer 100 includes an integrated 50W RMS per channel power amplifier. You can use most standard speakers with sufficient power rating. We're testing Sonos own speakers - which are excellent.

The ZonePlayer 80 is very similar - but has no power amplifier instead being designed to connect into an existing traditional music system. This could be your hi-fi or your TV surround-sound system.

Twenty years ago a 'music centre' may have included a cassette tape player, record player and FM/LW radio. Things move on - but the Sonos also has multiple music sources. For many the primary source will be your accumulated music library on one of your computers. The Sonos, by virtue of your existing Internet connection, will also play Internet radio and can connect to on-line music services.

Included with the Sonos product is a 30 day free trial of Napster. We had no problems using this and the quality of playback was excellent. Internet playback of course will depend on a good Internet connection!

A good range of Internet radio stations are supported with no configuration and for no charge. These included many of the popular UK radio stations including those offered by the BBC. If you're a Radio 4 fan then you can use the Zone feature to pump Gardeners Question Time round the whole house! I had no problems attaching to the various stations provided. One missing feature here would be the ability to pause Internet radio - a feature now common on DAB radio and something that I missed using the Sonos.

You own music collection

For many people the primary source of your music will be your own library stored on your computer. This may have been built, as in my case, by ripping your own CD collection or by purchasing tracks through an on-line service. Either way you have a substantial collection of music on your computer. Sonos can make use of this. Simply tell Sonos where to find the music on your network and it will build the tracks it finds into a browsable catalogue. Many standard formats are supported although not Digital Rights Management (DRM) protected tracks.

As is often the case with computers - particular running Windows - the PC is the weak point in the system and the only time we had any problems with Sonos. Using a computer connected to our wireless network worked well as long as we neither taxed the computer or the wireless connection. Making our high-spec machine do several things using Vista caused various hiccups.

Knowing Windows is always going to be the weak link in any system, we also have a central Linux file server that we use to store anything important. This is actually a fairly low-end computer with a couple of 500Gbyte hard disks configured as a RAID array (something I'd highly recommend to anyone - either disk can fail and we still have all our data).

Using the Linux file server as the music source worked perfectly - not drop-out and no connection issues. Given the price of the Sonos I'd highly recommend splashing out £250 for a 'media server' PC.

Controlling it all from your computer

You have two options. The first is a Windows application - the Sonos Desktop Controller. It searches your network for ZonePlayers and ZoneBridges and brings everything together. It then allows you to search for music on both the local computer and on other network attached devices.

The result is a very usable media jukebox like application - somewhat like iTunes but so much better allowing your to browse music by album, artist, genre, composer or play-list. You can add new music sources at any time and have them all presented as a single consistent library.

The Desktop Controller also allows you to control the music being played in each of the 'zones' or link zones into groups. The entire interface is very intuitive with no need to resort to a manual.

Of course it's a bit of a pain having to run back to you computer to change tracks or select more music (particular for those living in a 32 zone mansion). Sonos provide CR100 controller as an alternative. This is effectively a sophisticated remote control. Weighing a hefty 360g it has it's own 3.5" 320x240 pixel colour screen along with a set of controls. A small computer in it's own right, the controller runs a very similar application to the PC version. Navigation is a little tricky where you have have to enter text but other than that you can achieve just about everything with the controller that you can with the PC application - and it's much more convenient.

You can have as many as 32 controllers - one for each room of the mansion! The only problems with the controller is the cost. In the UK the CR100 is currently priced at £279 - possibly the most expensive remote control yet made!

The Sonos is a serious product that takes an integrated whole system approach to digital media and Internet audio into a single cohesive audio system. It is very flexible and careful planning is required to decide which components you need and then to correctly install those components. This is no more complex than I had to deal with building a component hi-fi 20 years ago. Once installed the system is very straightforward to use and presented almost no problems. A lot of care has gone into the user interface and this is obvious in use.

In the case of the ZonePlayer 100 - the sound produced by Sonos own speakers is very good. We connected the ZonePlayer 80 to our own somewhat old Sony micro-system via the aux-in connections and again the results were very good.

Requiring a wired connection into your home network is also a slight annoyance in the days of wireless everywhere - but we understand how this would avoid many support issues and frustration for people integrating with an existing encrypted network.

Bundles bring down the price a little as long as you can closely match you component requirements to a bundle. The Bundle 130 (ZP80 + ZP100 + CR100) without speakers is £699, saving £179 on the component prices. With speakers the bundle is £809 - saiving £197. The bundle does not include a ZoneBridge though.

In real terms that's probably less that the cost of a decent component hi-fi a few years ago. To get the best from the system you do however need more than two zones - the attraction of the Sonos is music wherever you want it so you probably need a zone in the kitchen, bedroom and living room at least.

For detailed technical specs check the Sonos web-site. The produce pages contain comprehensive technical specifications for each product in the range including the media formats supported :