Adding to its range of digital cameras, GE has released its E1035 model which looks remarkably similar to the companys E1235 offering. 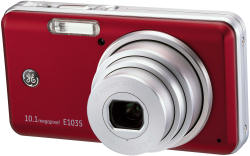 Opening the box reveals the camera unit; Lithium-ion rechargeable battery; battery charger with power lead; 1GB SD card; and leads for USB and AV connectivity. You also get a wrist strap, Quick Start sheet and software CD containing an electronic version of the User Guide plus ArcSoft PhotoImpression. As with some other models in the range, the battery needs to be removed from the camera in order to recharge it.

With its high-quality metal body encasing a GE Aspheric All-Glass Lens, the E1035 is a ten megapixel model with 3x optical and 4.5x digital zoom. The camera is available in red, silver or black with the review unit being of the latter type. I must say that I preferred the black casing to the red body of the E1235 that I looked at recently but I'm sure many others will have the opposite opinion.

Visually, colour issues aside, the E1035 looks very similar to the E1235 model. Apart from the model number, megapixel rating and information around the lens, the two cameras could be peas from the same pod - well actually they are, having both been designed by General Imaging. The E1035's dimensions (103 x 56 x 24mm) and body weight (145g) are exactly the same as the E1235 while I failed to detect any differences in the camera layout.

Arranged along the top of the camera are recessed power button, shutter control and zoom control wheel. At the bottom of the unit is a concealed compartment for the rechargeable Lithium-ion battery and 1GB SD card, to supplement the camera's built-in 26MB of memory, plus a USB socket which is also concealed. A 2.7-inch LTPS (low-temperature polycrystalline silicon) TFT colour LCD screen dominates the back of the camera. This is the only means of lining up scenes as there is no traditional viewfinder. As with the LCD screen on the E1235, I sometimes found it difficult to make out any details on the screen when bright natural light was present.

Sitting alongside the LCD screen are buttons for face detection, menu facilities and erasing images plus a mode wheel and navigation pad that doubles as the means to access macro, self-timer, flash and function features. The mode wheel allows you to switch between still, video, portrait, scene, play-back, three-shot panoramic capture and image stabilisation options. As you turn this wheel so the action will be shown on the LCD display along with a brief description.

The real-time zoom feature can be used when capturing images or videos and when playing back still images. Included among the supported scene modes are those designated as Sport, Children, Indoor, Snow, Fireworks, Glass and Night Portrait. Images and videos can be captured with a choice of best, fine or normal compression. When playing back images you can rotate individual pictures, select from a couple of transitions for a slideshow of all images or view as thumbnails by using the zoom control. There are also options to trim and resize content. Videos (20fps) can be played back at normal or slow-motion speed and frame-by-frame.

Along with the previously mentioned zoom capabilities, the lens used by the E1035 is rated at F2.8 (Wide) to F4.9 (Tele). The built-in flash has a range of up to 4.1 metres and the camera supports face, smile and blink detection plus has Electronic Image Stabilisation providing an anti-shake feature. The camera has the usual support for PictBridge and ExifPrint.

Fortunately the battery recharging unit is not cumbersome but I would have preferred to be able to recharge the battery without the need of removing it from the camera. The initial full charge should take no more than four hours and this will allow you to capture up to 210 images. No problems, other than the poor performance of the LCD screen in bright light conditions, were detected with this camera. Images were of good quality and I even appreciated the recessed power button, with a less than three second response time, the more I used the camera.

Hi I need Help,, I borrowed my Ate's GE E1035 Camera, I wanted to transfer the pictures but I forgot to borrow her USB and Charger, so I used my 5310 USB unfortunately the device doesn't appear to my computer, then I noticed the camera was totally black-out. I tried to closed and open the cam, the flash still work but i couldn't see anything from the LCD Display? What happened? What should I do? any help please I need to repair it before my Ate knows it please.....