This is a set of speakers that can also charge external devices; it is also a dock. Yes that word does have a life beyond the i devices. Other Sonoro devices are high end so why should you spend your money on this device. 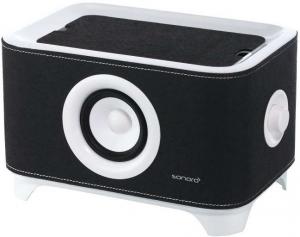 It is not often I start with the Instruction Manual, I can just forgive English being the second language after all they are not manufactured in the UK. What is harder is that the one page in English lists the contents and tells you to read it in its entirety before using and then the next page does the same for the next language and so on.

Then from page 12 on you have a series of pictures and diagrams with little or no worded instructions on how to use it. Yes this is a method others have used but as far as I know not in the case of an item able to do several things.

It looks like a small sandwich box in black and white. It is 26x16.5x16cm, looks however are not everything as the sound is rather good.

The power lead enters underneath and there is also a flip on/off switch under the unit. The first of two 3.5mm auxiliary inputs is also located under the base of the unit. The only control is the volume twist knob on the right side. The front has the speaker but the cleverly raised base allows base sound to exit under the unit. I tried it on various surfaces and each gave a different result. I was quite pleased with the sound from a carpeted floor.

So far you will have gathered this is a mains powered speaker it can be used with ‘i’ devices and MP3 players as well as being the speaker for a computer, however that is far from everything that this unit has to offer.

There is a removable lid and under this are a range of connections. However turn the lid over and it provides a method of holding things such as larger Apple and Android devices and if you then connect the supplied 3.5mm lead supplied you can use it as a speaker while viewing any video output without having to hold the unit.

The dock is weighted so anything placed in it either landscape or portrait is unlikely to over balance. The dock surround is 9.5x4.5cm with the actual grip part has a rubberised inside is 8cm long and surprisingly robust.

The connections under the lid are a switch to allow connection from two devices. A 3.5mm jack input and two USB sockets.

One of the two sockets charges at 2.1amps while the other charges at 1amp. Care should be taken to know which is which.

I tested it with several unit the largest of which had a 10inch screen but in portrait mode it should support anything up to 23cm. An accompanying sheet states ‘any web tablet, mobile phone, etc’ which seems fair enough.

I see from a press release that it is available in Red, Green, Grey or as I had Black, all have the white edges and speaker surround. The case is wooden apart from the trim and the colour is a felt covering the sound from the 3inch speaker is rather good.

Doing my searches found the Sonoro Troy at £179.33 with free delivery.