Apparently these units have been available in Australia and China for two years, now they are available in the UK. Full HD 32inch TVs are still quite rare with most only starting at 37inch and HD Ready still being the norm at 32inch. 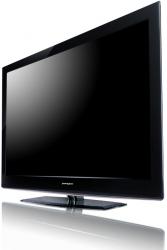 The Pangoo S700 LCD television measures 77x47.5cm with the attached stand raising it 3cm above whatever you stand it on. Thanks to edge-lit LED back-lighting the unit measures only around 2cm deep. The first surprise was that the stand comes attached and it is quite easy to just remove from the box as the mains lead is hard wired into the unit you only need to put in place and attach the aerial lead and you are ready to switch on. Find the menu on the remote control and then set up. As this is a multi country product check ‘United Kingdom’ before the program scan.

I found the scan quite quick at around two minutes for the 96 digital channels and 5 analogue channels available to me. This is one scan process and not two as for so many recent TV’s. At this point BBC 1 is playing in the background and the sound sounds wrong but I assume – wrongly – that it will correct itself when the menus are off the screen.

The picture quality is excellent, great lifelike colour, good depth and clarity all seems correct. It’s just the sound; time to delve into the audio section of the menus there is bass, treble and even speaker balance whatever I do the sound is still wrong. Now I try to analyse what is wrong. It’s as though there are two audio streams the background is one and the foreground another. The problem is that the background is at around three times the level of the foreground. To me the problem must lie with the speakers or connections to the speakers.

So looking at the range of connections I see the only output is the headphone/earbud 3.5mm jack. I find a set of speakers and plug them in and although the speakers themselves are small and nothing special the sound is immediately correct. Without these it would be virtually impossible to listen to anything because of foreground/background sound imbalance.

Okay if you got this unit it would be returned as faulty but as I found a workaround I continued my review of it.

The viewable screen area is 70x39.5cm which gives you a diagonal measurement of 31.5inches, slightly less than the 32inches claimed.

The bottom edge of the screen has seven touch buttons that illuminate when touched. These allow you to increase or decrease volume, the channels, enter the menu, choose your source and switch it on/off (standby). However most will probably never use them unless they lose the 48 key remote control. The 20 page manual describes things well enough but the remote I was sent differs from the one illustrated in the manual.

The available connections are grouped in two linked areas, the back left and the left side both around half way up. There are two SCART, three HDMI (one on the side) PC input (VGA) also inputs for Component, S-Video and Composite as well as USB as this unit can also display Pictures, Audio and Video from the last source.

The source button is the one place to change input with a list appearing on the screen once pressed. If you want to view analogue these channels are found at 900 onwards on the TV menu, there seems to way to change these to the correct order with ITV (in my area) appearing first but as Analogue is being fazed out maybe this is not important.

There are a few inaccuracies in the manual but I assume I got a pre release version as it was A4 in size. The main problem is the terrible sound but – assumption again – I assume the speakers in the unit I was sent are faulty. Trying to look beyond this – difficult – the colour quality and clarity were excellent and assuming it has decent speakers then it is worth considering. I see they do models from 22inch to 42inch (some are Full HD) so a model to suit most homes.

As soon as I can find someone in the UK selling them I will add a comment so no value smiles at this point.