With over 15 million players worldwide, the Jewel Quest series can justifiably claim to be one of the most popular games in the Match-3 genre. To the original Jewel Quest I, II and III titles plus a couple of offerings in the Jewel Quest Mysteries series, we can now add Jewel Quest Heritage. 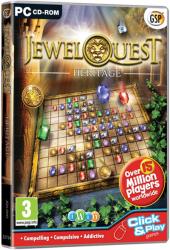 Jewel Quest Heritage reverts back to the original format of completing numerous Jewel Boards that are completed by creating groups of three or more similarly coloured jewels.  In the earlier Jewel Quest titles, Rupert Pack and his wife Emma searched for and discovered the fabulous Golden Jewel Board treasured by the ancient Aztecs.  This board was then presented to the Rupert Pack museum where it could be seen by the general public.  Under normal circumstances this would have brought the story to a logical conclusion but this was not to be otherwise we would not have the game which is the subject of this review.  Rupert’s evil adversary (is there any other type), Sebastian Grenard, claimed ownership of the Golden Jewel Board and was awarded the board following a court case.  As a result, Rupert has to hit the trail yet again to find the necessary evidence enabling him to reclaim his rightful ownership of the Golden Jewel Board.

Working backwards through his family tree, Rupert needs to visit locations that will provide the clues that will help him unravel his family history and lead him to a connection to Hernan Cortes that will prove his right to claim the board.  The game starts with a tutorial session that is located in the room of Rupert’s daughter Natalie.  With the boards available in this room you can try out the three different game modes that occur throughout the game.

Taking the leading role in game formats is Standard mode whereby you can create match-3 groups by exchanging two adjacent jewels.  In Limited jewel mode you only have access to the jewels located in the lower portion of the board as you create your match-3 groups.  The third and final format is that of Swap mode which limits you to a specific number of moves. Unlike the other two types of game play, you are allowed to swap adjacent jewels without creating a match-3 group when playing Swap mode.  In each case you have to turn the complete board to gold by creating match-3 groups.

After the tutorial, which you can miss if you wish, the game starts in earnest as you select from the boards in Rupert or Emma’s possession before moving on to Rupert’s various ancestors.  Each board is displayed against a picturesque backdrop that is relevant to the current stage of the storyline.  At the successful completion of each board, which needs to be carried out within a set time limit, you are rewarded with a puzzle piece.  These pieces can be used to help recreate one of the image’s representing Rupert’s ancestors which are displayed in family tree format.

You will need to complete all the boards in the first level before you get enough puzzle pieces to build up the portraits of the preceding level of family members.  An unlimited number of attempts are allowed to complete each board with each failure bringing forth words of encouragement or occasionally sarcastic comments.  After three or more failures with a particular board you are offered the opportunity to have additional playing time.

Along with the various coloured jewels of different hues, some of the boards will have special objects that can include gold and silver Aztec coins; black crows; monkeys and cages in which to trap them; clocks giving additional time; frozen jewels and Fluorite jewels which can not be moved.  With all these various items populating the board it can be rather difficult at times to identify the individual cells that are yet to be turned to gold.  Fortunately by holding down the left Ctrl key will temporary remove all the jewels and other items allowing you to identify those areas still not gold.

With 175 unique boards, that gradually become more difficult as you progress in the game, Jewel Quest Heritage is a well designed game that will keep you coming back for more.  The game is challenging and visually impressive with scenic backdrops that can be used as wallpaper for your computer screens.  Priced at £9.99, Jewel Quest Heritage requires a 800MHz processor, 256MB of hard disk space and support for DirectX 7.0 running Windows XP or later.