It must be at least two years since I first saw these sort of items advertised, however for one reason or another it is only now late in 2008 that I finally got to test one. This unit from ION comes with three different pieces of software.

£64.95 from Amazon
including shipping

£79.95 from Firebox
including std delivery 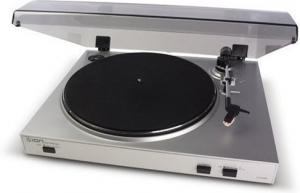 The record deck is 40x34x10cm, mine was silver in colour with a clear Perspex lid. There are three push buttons on the front and a USB connection on the back along with two RCA audio output sockets and mains lead input.

The three push buttons are for setting the deck speed 33 or 45, to automatically lift the stylus from the record and a stop button. The reason I mentioned these is that they are not controls to effect in any way the output to the PC. This is a totally dumb unit that just plays LP’s with no audible sound output (unless you connect the RCA sockets).

The three pieces of software are Ez Vinyl Converter, iTunes and Audicity software. The first and last install in seconds and the middle one takes around five minutes, in total they take around 220MB of hard disk space.

Load the Ex Vinyl Converter and follow the prompts. 1) Put record on the deck and lift stylus onto the record. 2) Press record. 3) Either press next or record another track. 4) Fill in details of the artist, album and track details. Then once it has the items stored on your PC/Notebook it then opens iTunes and the data is transferred into MP3 at 192MBPS.

Copying from the deck to the PC is a real time process and while you hear something like what is playing it will not sound great with a number of clicks that are probably not on the record or if they are you would not normally hear them. At this point you probably think I have just wasted £80 as this is terrible. Do not give up, it gets better, a lot better.

Once iTunes has compiled the tracks you can play them and now you hear the real sound captured it’s quite good and unless you give it a really naff LP to work with no clicks or crackles.

To give an example I transferred ten tracks they totalled just over 76 minutes of music, with side switching this takes around 80 minutes. Next there is around three minutes where the PC works in the background on the data and you see nothing happening apart from a little hard disc activity. Next enter the details into a form that pops up on the screen say another four minutes. It then opens iTunes and this changes things into MP3 and this takes another ten minutes. So to copy the 76 minutes of music and turn it into MP3 will take around 97 minutes.

This of course is a Digital signal and as such is just a white noise, probably the reason why the quality you hear whilst recording is less than perfect as it needs to be converted back to Analogue very quickly so you hear it in near real time.

The ION, Ez Vinyl Converter and iTunes method gives 192mbps MP3 scanning the manual I can find no way of recording in .WAV which of course gives CD quality.

The method I have used for years involves using a standard record deck/amp and taking the output that would go to speakers carve up the end of a 3.5mm to 3.5mm lead and plug this into the sound card on a PC, yes you do need to be careful that the volume level is not too high and then I use a rather nice piece of software called LP Recorder from an Australian company. This gives .WAV output and then using whatever CD writing software you like to produce CD’s. I can then use other software -my choice has always been Music Match to make MP3 files.

The ION record deck is available from www.firebox.com/product/1401/USB-Turntable  at a cost of £83.90 including their standard delivery charge.

Your'e just pessimistic. And you wrote nothing about how it sounds when playing records on the ION player when connected to a stereo or reciever. For me it seems rather as a vinyl player with the ability and freedom to convert your reccords to MP3's so you can store the music if something would happen to the vinyl.
Rating:

The ION iTTUSB-05 is the entry level for a number of decks. At the top end and at a price tag of £299 the deck will burn a CD directly without use of a PC. In between there are two decks, one will download to an MP3 player and the other will download to a flash card.
I own the Numark version of this deck, slightly more expensive at £89 but with a better quality arm. My route to a CD is through a Fostex MR-16 multitrack recorder with a built in CD burner. The results are excellent.
I have read that the A to D converters in these decks are not of the best so this is why I have kept the Analogue signal to go into the Fostex, with its acceptable A-D converter and EQ processor, but it is a matter of choice.
Why buy such a deck? Well, in my case, I have a collection of Theatre Organ LPs, some of which are quite rare, so a CD copy is very desirable and so easy to produce. I would recommend the ION deck.