This is designed by Stefano Giovannoni. It looks very swish and is a high quality DECT product. When on the charging base it looks elegant away from the base it still looks smart, even lying on the sofa or the kitchen table. 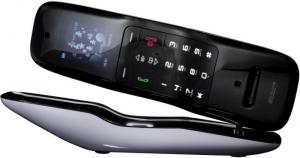 This DECT phone from Alessi measures 18.5x5.5x5cm when base and handset are paired together. Individually only the last figure changes and that becomes a maximum of 3cm with the base unit and 3cm for the handset. It is a very stylish matt black colour.

Even the User Manual has an air of quality about it. In Italian, English, French, German and Dutch. Not like a lot of such offerings each are in there own section and has its own numbering and of course is very easy to follow.

It comes with two leads to fit in the base of the handset one going to a mains connection and the other to the BT socket. While the mains connection lead ends in a two pin plug a 13amp plug adapter is supplied in the box.

At this point you probably think everything is perfect – wrong – the other lead may well work in Italy, France, Germany and the Netherlands but it has the wrong end for the UK. I will be generous and say that I was sent a unit not fully converted for UK use. Any normal BT type lead will however work without any problem.

The base unit weights 104grams and the handset slightly more at 141 grams this of course has a solid battery in it so it can be used away from the base station.

Plug the phone into a BT socket and the mains, place the supplied battery into the handset back and once some charge is in it you are ready to use it in and around your house/garden or office. At this point you discover that the stylish matt black only applies to the back of the base and the handset, the top of the base and the back – working side – of the handset are both that terrible shiny black that will show every finger mark.

When off the 4x3cm top display is invisible. When you switch on the first thing it does is find the base station then it gives itself a handset number. The four corners of the display either have an icon or a name. Once the phone is configured it can display a whole line of icons along the top of the screen. At the base of the screen are what are called left function key and right function key at this stage they are Menu and Phone Book.

Below the screen are phone answer and end keys using the green and red phone icons with two navigation keys in between. Next four lines of touch keys for dialling, these keys are all illuminated as soon as one is touched.

Sound quality was good and using it in my garden was no problem, in fact apart from the initial problem of a non BT cable being supplied I found no problems and it worked exactly as it should. In fact you could consider it to be a home mobile as all the controls on the handset will work in the same way as those on a mobile.

I trust you are aware that design is never cheap and this is no exception the Alessiphone Promelit is available from the link below for £90.90

Supplied illegally with a 2 pin plug. And no encapsulating 3 pin how do they get away with it
Rating:

The style of this phone is good, but this is all.

The Mobile Station does not work well with other base stations.
The Date/Time is only available if original base station is available
and this lost the date every time it plugged off!

The is a white power supply cable delivered with black base station?

* With AVM fritz box as base station, there is no base station menu!
* Phone book and redial does not work with my fritz.box!
* The menu translation in German is horrible!
* The sound is quit NOT good!
* You have no change to factory reset if you lost the PIN.

This is a realy bad Dect Phone ...

I like these phones a lot, and have two of them. BUT - the rechargeable Li-Lon battery has come to the end of its working life, and I can't find a replacement anywhere. Alessi won't answer my e-mails. Any thoughts?