All the latest generation iPods, with exception of the tiny shuffle, are capable of video storage and playback. This can be an excellent way of passing time, either on long trips or even if you're having trouble sleeping. 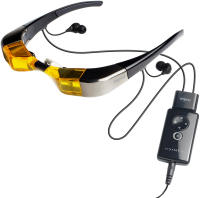 I'm a complete convert to video on the move with around 20 hours of my favourite videos on my iPod touch. I've watched on the train and in a camp-site during particularly bad weather. I've even used it on a car journey to keep the kids entertained.

There is however a problem - it's not comfortable watching the iPod screen for any length of time. It's not the quality of the screen, which is brilliant. It's having to either hold the screen up to watch (if laying down) or a sore neck having to look down. That's where the MyVu glasses come in handy. I reviewed the last generation 'universal' edition about a year ago (read that review here) and was impressed. This time I'm taking a look at the latest "Crystal" edition.

To recap, the MyVu video glasses have embedded in them a tiny LCD screen with a set of lenses such that when you use them the image is correctly focussed on both eyes. If you imagine sitting in an armchair wearing the glasses it feels like you're watching a large TV across the room. The lens allow your eyes to focus as though looking at an object 2m away. The main difference being that as you move your head the screen moves with you! The quality of the image is very good - the built in screen has a resolution of 640x480 - which is higher than the iPod itself. Do note though that the glasses have no focus adjustment. This means they are fine for people with good vision or who wear contact lenses, but won't work for those with glasses. 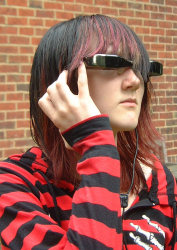 This new version has reduced the weight to 82g (for the headset) and increased the viewing area by 35% over the previous models. Sound is provided by excellent in-ear buds provided in partnership with "Ultimate Ears". Three different sized ear-adaptors are provided.

Although you can easily see over the top of the glasses I found that once a video is playing you soon become totally engrossed and you loose track of all outside stimuli.

Power is provided by an internal battery charged through a standard USB socket for which an appropriate lead is provided for connection to a computer or dedicated power adaptor. A full charge should last around 4 hours, which is close to the 5 hours continuous video playback provided by the iPod Touch. The battery is located in a dongle that hangs down from the glasses that also allows you to control brightness and volume so you can leave the iPod in your pocket.

I used the glasses on both the iPod Touch and an iPod Nano. The touch worked flawlessly, prompting to ask whether I wanted to play video on the screen or on the external "TV". The Nano worked well - but was slightly more temperamental about switching to external video.

The MyVu Crystal is available in two configurations : "Made for iPod" than includes only a connecting to and iPod; "standard" that includes A/V cables to connect to non-iPod players and finally an "all-in-one" package that includes both.

You'll also find a soft pouch in which to keep the glasses when not in use, however I'll repeat me my suggestion from the last review to invest in a hard-case for the glasses if you expect to carry them on your travels.

If you've fallen in love with portable video then I'd strongly recommend taking a look at the MyVu glasses.

The new MyVu Crystal is available in the US direct from MyVu for $299.95. In the UK you can buy from the Apple Store for £225.06, including shipping. This is about 30% more expensive than the previous model I reviewed - definitely still in the luxury bracket being more expensive even than the iPod Touch.

I too have the crystal glasses, and would love them if it were not for my refusal to join the everything iPOD group! I have an Archos 5, which I cannot connect, and a PSP which works very well with the glasses, except for the cumbersome number of cables required to connect to them. COme on Archos/MyVu! Not everyone has or wants an iPOD! Make a cable to connnect the incredible Archos tablets!