This is an Analogue TV but it has almost any connection at the rear so with a digital PVR you have a new TV with the ability to view and play HD. 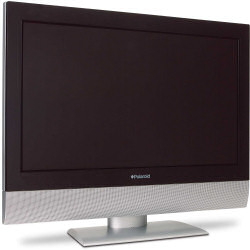 This is the first TV I have reviewed that is supplied with a screwdriver. Yes it is self assembly - of the stand - the screws are provided as are the screw holes and after a couple of minutes it is ready. A good idea should you ever need to relocate it as the box for a 32 inch TV is tiny only just bigger than the screen so the stand needs to be flat in the boxes back.

The outer screen dimensions are 80x58x10cm, the stand raises the 58cm height by 5cm and it is a maximum of 36x22cm with it being a lot wider at the front than the back. The actual screen is 70x39.5cm giving the diagonal 32inch measurement. The unit is matt black giving a pleasing effect in a dimly lighted room even when not the whole screen is used as the frame merges into the screen. The exception are the speakers that are a silver grey fine mesh in a 9cm area at the base of the screen.

One of my few concerns was the sound quality, fine when you got it right but the experimental surround sound option just sounds wrong, the volume needs to be set a lot higher and it is still not that clear, but leave that option alone and all is fine.

This is an Analogue TV tuning the five terrestrial channels and any video recorder you may have is easy enough. Changing the position of the video is possible but you certainly will need the manual and even then you will probably have to read the section several times. I prefer my video to be channel seven and to leave channel six vacant takes some work.

Why only a year or so (in some areas) before the digital switchover would you buy an analogue TV? Well it's ideal if you have a Digital PVR or use Virgin or Sky.

Looking at the rear you have all the connections in a tight central area just above the stand. There are two HDMI, a VGA, two SCART as well as Component, TV Cable, Video and Audio Out. Although connection of several different items is tight it is possible.

While basic controls are on the TV you are only likely to switch it on/off via the dedicated switch beside the power lead, nice that you do not have to leave it in standby or pull out the plug, something that some other manufacturers might care to take up.

The remote does everything else it has 45 keys and because the unit is analogue the reason for leaving it in standby is not there as of course there is no program guide to update. I found it a little strange to address the SCART sockets as Video 3 and Video 4 but once you know it's no great problem just different from others.

Picture In Picture is sort of possible but only for things other than live TV such as a PC or input via HDMI. The choice is small on top of large in various positions or 50/50 side by side with you able to choose and change the source of sound.

Another slight niggle is with Teletext right at the top right second row of buttons to turn it on/transparent/half screen/off and all the other settings are the bottom row of four buttons.

As mentioned there are various sound modes but also a balance selection as well as being able to adjust bass and treble all on a 0 to 100 scale. All this and more are described in the 45 pages in English in the five language manual.

Doing my Internet searches found the Polaroid 32inch TV FLU-3242 at a best price of £379.98 including free delivery from the first link below. I am told this is identical to the model I reviewed.

Similar experiences to Boneham. Had for 13months - now the main Printer Circuit Board has failed ... No picture just sound ... I'm waiting for the bill ....
Rating:

Originally pleased with the tv, but after 13 months ( Of course warranty only covers for 12 months !! )the tv decided to switch itself off and refused to come back on again.  The power lead tested fine and we could hear the power going through, but the l.e.d.on switch would not light and the tv screen did not come on.  Returned the tv to PC World where we bought it from and they could only offer us a repair man to come to our home at a price of £120.00 call out charge plus parts etc. Hence we wont be shopping for anything at PC World again !!
Rating:

can you please tell me how i can turn off the internal tv speaker off as i want to hook up bose cinemate and there is a squeaking noise coming from the tv many thanks vivienne
Rating:

Thanks, Paul, and I apologise for not adding onto my criticism how much I appreciate your taking the time and trouble to do the review in the first place :)
Rating:

Picture quality was fine both on it's annologue channels and when viewing through my cable. Colour fine, contrast fine, brightness fine and of course no ghosting.
Rating:

Picture Quality not worth even a mention?  Scare stories of Standard Definition display inadequacies abound, and the gurus advise not to buy a minor brand LCD TV - making the purchase of an LCD by those needing to upgrade their old 4:3 CRTs very daunting.  Presumably this LCD will, like many of them, be great for gamers, but what about Freeview TV watchers aching to attach their STBs to a decent sized widescreen TV on a budget?