This is an ideal bedroom TV and with the DVD player built in so even when there is nothing to watch live you can always resort to the DVDs. 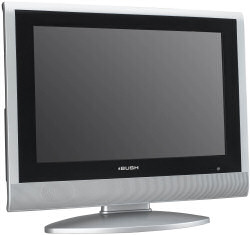 I was somewhat surprised that no aerial is supplied with the Bush LCD/DVD combination. If like me the bedroom is just too far away from the roof aerial then a portable one has to be used. While the image they give is normally far from ghost free the quality in most cases will be watchable.

I first tuned the unit in my lounge using the loft aerial. Next I moved it to the bedroom and found a couple of portable aerials. One gave reasonable images so that was put to use

The unit is black and silver/grey. The screen surround is 43x33cm. It's stand is 30x15cm and it raises the TV/DVD around 6cm. The stand itself allows the screen to move back/forward only around 15 degrees with no side to side movement. The maximum width is 8cm in the top centre where a grad handle makes this light unit very easy to move around. The rest of the width is only 5cm. The internal screen measurement is 33x21cm giving the 15.4inch diagonal measurement.

Going round the controls and connections there are eight buttons on the top all clearly labelled as to their use. Most I suspect will only use the remote control. The DVD unit is a slot mounted offering in the left side along with five clearly marked buttons to control it. The rest of the connectors are in recessed area of the back on the right side a total of ten items all clearly labelled.

From top to bottom these are DVD Digital Audio Out, RF In, Headphones, PC Audio In, Two Audio inputs L and R, Video In, S-Video In, SCART, VGA in, HDMI in and the 12 volt DC input from the power brick supplied.

So the unit can accept inputs from almost any external source including HD or Blu-ray and of course a PC. Here however I will concentrate on what is supplied in the unit with the aid of a RF lead (coaxial) and a pile of DVD's.

It has a sixty four key (yes 64) remote control. Getting to know where certain key buttons are will take some time. I must admit I use the sleep timer on my DAB radio and often fall asleep listening to music, not sure if I could do the same watching TV - yes I have dropped off in the lounge - but that was accidental. However should you purposely do so it does a sleep timer facility.

As always I try to navigate my way around without recourse - initially - to the manual. I assumed - wrongly - that placing a DVD in the drive would override the TV in fact you have to toggle through all the choice SCART - Composite etc to come to DVD and only then will the controls on the remote or the TV come into play.

Watching DVD's was fine with the remote or even the controls on the TV able to do all the normal things you expect to be able to do when watching a DVD. The DVD player can also be used to play audio CD's - so maybe the sleep timer has it's use - it can also play CD's of MP3 or JPEG's although there is a small slip of paper to say there is a 3MB size limit for JPEG's but that really should not worry most people.

Documentation consists of a connection diagram that shows everything but not to scale but as the unit is so light it's not the same as having to move a large TV to find out exactly where a connection goes. I did try the other connections PC, SCART etc but only to see they worked correctly. The main queries you may have should be sorted out by the 64 page user guide.

Telextext and Fasttext worked but of course both were far better on a roof/loft aerial rather than a room one. As a TV on the roof/loft aerial it was fine on a room aerial iffy and if you live in poor reception area probably not useable, hence the DVD, SCART, HDMI composite etc.

Doing my Internet searches found the Bush LCD15WO8DVDHD unit for a best price of £249.99 from the first link below.

My 80 year old mother has one of the Bush TV/DVD combos and she is stuck on the DVD mode and can't get it back to the TV and I am 200 miles away from her but can't work out what she has to do to get back to the TV. Can anyone help? Thank you!