Capturing a photo from behind you is just one of the features with this Samsung digital camera. 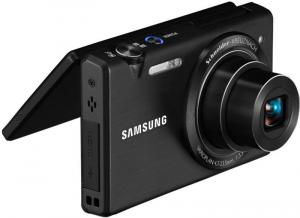 Available in a choice of black, red or white, the Samsung MV800 is a compact camera that combines 16.1MP capability with a flip-out screen to help capture shots at unusual angles or self portraits.  This flip-out feature does add a little to the depth of the camera but this is not too excessive at an extra 5mm.  The MV800 has dimensions of 55 x 92 x 22mm (H x W x D) and weighs 143g including the BP70A 3.7v Li-ion battery pack which means you can slip it into a pocket or bag and even let it dangle from your waist using the supplied lanyard.

Keeping the Schneider 5x VarioPlan 4.7-23.5mm 1:33-59 26mm wide-angle lens are the Flash and AF-assist light/timer lamp plus a slightly raised Samsung branding.  A power button, glowing blue to indicate when on, sits between the built-in microphone and a shutter button wearing a collar for adjusting the zoom level, occupies the top right of the camera.  Both these buttons are positioned flush to the body of the camera which could cause some difficulty if you need to locate them by touch alone.

The top of the camera also features a hinge bracket for the flip-out touch screen.  While this 3-inch screen normally takes over most of the back of the camera, it can be moved through 180 degrees until it face the opposite direction.  When the screen reaches this point, what was the bottom of the screen becomes the top and blocks access to the standard shutter button but not the zoom control collar.  A replacement shutter button is revealed on the now-uncovered back of the camera’s body.  Touch-sensitive Playback and Home buttons are to be found on the right of the screen.

While the ability to position the camera’s screen is a nice feature, it could have been improved if it could be twisted left and tight as well as flipped vertically.  I also found that I needed to look at the back of the camera in order to find the second shutter button when capturing a self-portrait.  Overall the screen is more useful than gimmicky. 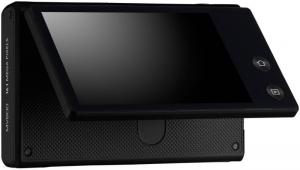 Positioned on the right side of the camera’s body is a concealed compartment which contains ports for HDMI and USB connectivity.  While an appropriate USB cable is provided for charging the battery and linking the camera to a computer for transferring files, you will need to provide the HDMI lead when you want to view content on a television screen.  A second concealed compartment, located on the base of the camera, holds the battery and a microSD card to supplement the 10MB of internal storage which will be quickly eaten up when you capture a few shots.

On pressing the power button there is a sub 2-second delay before you are ready to make your first capture during a particular session.  Touch the Home button alongside the screen brings up a picturesque menu consisting of five panes that you can finger scroll in either a left or right direction.  The first pane on the review model concentrated its focus on options for capturing content including panoramic (either left and right or up and down) and 3D images (an appropriate viewing display with be required for this feature) plus a video capture mode which gives you an on-screen start button.

The next three panes provide a number of special effects.  You can create a picture-in-picture shot by combining a background scene with an insert image.  A Funny Face effect was a bit of a disappointment when given my face to work with (I could see very little difference) and the Beauty Shot needed better subject matter to produce anything reasonable.  I had more success with the Dual IS feature that was able to combine two captures of the same scene using different settings.  Intelligent Portrait, found on the fourth pane performs a similar operation for a portrait capture.  The final pane contains extras such as an Album, Slideshow, Photo Editor and Storyboard Maker apps.

The Samsung MV800 can produce reasonable images although those captured in low lighting conditions were disappointing.  I feel this camera is better suited to the casual user who will enjoy the screen functionality and the various special effects for producing fun images.  Originally launched with a price tag of £249.99, the Samsung MV800 is currently being advertised at between £134.99 and £174.72 depending upon your choice of colour and suppler.