This is Sonys entry into the Small and light Camcorder market. I have reviewed a number of units in this and so far my choice has been the offerings from Flip. Here Sony adds a couple of extras still images and 360 degree images or videos. 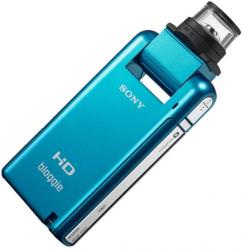 The Sony Bloggie camcorder measures 10.5x5x1.5cm and weights 125grams. It comes with a 4GB MemoryStick (the Sony variant) but it will accept the cheaper SD cards.

The lens rotates up to 270° meaning that you can see over tall people or even take images to include yourself. There is an on/off button on the top part of the right side but you do not really need it as rotating the lens from its off (covered) position will turn the unit on. Continuing down the right side there is the wide angle/telephoto slider (4x digital), next is a door that hides A/V out and USB. The base has a standard tripod anchor point.

The left side has a long flip open door that hides whatever MS or SD card you use as well as the solid battery. Because the lens rotates the top is clear. The face has only the lens when rotated 90degrees. This leaves the back which can have the lens rotated 270degrees and a large TFT screen is below this 5x3.7cm however when capturing the viewed area is 3.7x2.3cm of this. To the right of the screen are two buttons the top to capture stills and the lower to capture video. Below the screen two buttons and between them the ubiquitous five position joystick.

Still images  5MP 2592x1944 can vary in size between .8 and 2MB in size according to content. I found snapshots taken of static things link building were fine, people were however far from perfect especially if they moved. Light was also a problem especially if there was too much. For me anyway not a replacement for a still camera.

The 360view lens in as extra it is plastic and clips unhappily over the internal lens when in the 180degree position. I can see uses for people wanting a panorama shot but I cannot see any real use for a 360 degree lens. Not something to spend extra on unless you can see a good use for it. On seeing the prices I found out that the lens is actually supplied and not an extra as I was told at the briefing. With the supplied software (see the video on the link) you could be able to get something worthwhile out of 360view lens in certain situations.

So this leaves the main use of the Bloggie as a small lightweight easy to use pocket Camcorder. Flipping the lens and pressing the record video button is very simple and in all the numerous samples I took indoors, outdoors, in gigs and round and about I found the sound quality excellent probably even slightly better than the Flip.

I took some rather nice footage, I also took some other that was rather poor. If light conditions vary in the same clip then the adjustment to the different light is not good. Should the light diminish then you latter part will appear rather dark. Should the light increase then it became rather overexposed. I took some movies in a fairly dark room initially it coped but when a blacked out window - behind my right shoulder – was uncovered the over exposure was terrible as was the flaring and this was light coming from around 210 degrees behind the lens.

I could understand if the light was directly into the lens. This for me really makes it a product to avoid. Lets disregard the gimmick of the 360degree lens (and extra anyway) the still images have problems. The video which should be its mainstay also have problems and really the only winning part is the audio that is rather good.

Doing my Internet searches found the Sony Bloggie at a best price of £113.98 with free delivery from the first link below. The unit in the link is white, mine was black but they also do other colours.

Sony's Bloggie Touch stands out for its design and build quality, which is centered around a 3-inch touch screen. It is attractive, lightweight, and small; full use of 3-inch screen for shooting; autofocus macro; captures stills while shooting video; simple to use.