A small, easy to use and reasonably priced camera from a maker who does lots of more expensive units both pocket and DSLR unit. Every maker has to have something at the lower end of the market both in price and functionality. 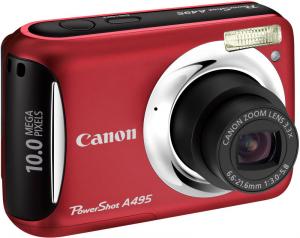 It is 9x6x3cm and weights 173grams with the two ‘AA’ batteries inserted. With the lens fully zoomed it adds close to 3cm to the 3cm width. The flash is almost above the lens (actually very slightly to the right) and is never nearer than 2.4cm to the lens.

The top of the camera has an oblong on/off button and a larger round shutter release to its right, the latter has a very fine trigger mechanism so the normal half way down to focus before capture can need practice to achieve.

The left side has nothing while the right side has the anchor point for the wrist strap as well as a door behind which there are D/C input, A/V output and a micro USB for transfer of images to your PC should you not favour the removal of the SD card to do the transfer. The latter would of course require a card reader to perform.

The base has a screw for any tripod you might connect and a slide door where you insert the two ‘AA’ batteries and any SD card. This leaves the back that is dominated by the 5x3.7cm (2.5 inches diagonal) TFT screen. To the right of this are ten well marked buttons that control the cameras settings and allow zoom and video.

The 10MP is quite small by some current offerings as is the 3.3x optical zoom but as stated every company needs an entry level offering.

To change modes you have a toggle Auto, Program, Scene and Movie, simple enough once you have used the feature.

The options on Scene require an up or down movement from the top or bottom control of the ubiquitous five position joystick, Portrait, Night Scene, Kids and Pets, Indoor, Face Self Timer, Low Light, Super Vivid, Poster, Beach, Foliage, Snow, Fireworks and Long Shutter. While I have not tried all 13 of these settings I have sampled several and they all give rather good results. Certainly they should be enough to get the novice beyond Auto. 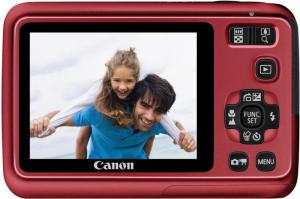 I am fairly certain that this unit would come with both a manual and software (both were missing in my test sample) and especially for the novice the Photo Print software Canon normally supply is excellent and I think the first to allow you to print four near 15x10cm borderless images on a single A4 sheet of photo type paper.

I am not a huge fan of cameras using standard ‘AA’ batteries but I can see the advantage for people away from home a lot as most places sell ‘AA’ batteries. However there must be an option for some form or rechargeable unit else why put the D/C input on the unit.

Doing my Internet searches found the Canon PowerShot A495 at a best price of £87.81 including free delivery from the first link below. Mine with silver grey and black but I see they do both red and blue at little more money.

I found the Canon PowerShot A495 available for $99 including free delivery from Amazon on the first link below. Mine with silver grey and black but I see they do both red and blue at little more money.

I found the Canon PowerShot A495 available for €100,85 including free delivery from Amazon on the first link below. Mine with silver grey and black but I see they do both red and blue at little more money.

i havnt got one but looks good