This is a four in one unit as it has the ability to send and receive faxes. So not only a rather nice printer and a good unit for the occasional copy but also useful for scanning both to a PC and it also has the ability to scan to a card or USB stick. 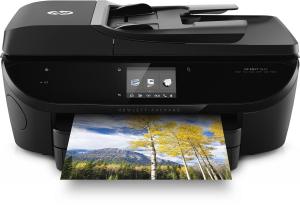 Thed HP Envy 7640 measures 44x45x20cm and weighs less than 8Kg, the second figure, the depth, includes the power lead which protrudes beyond the official measurements.

Even in its small height there are two inbuilt paper trays an A4 one at the base which should hold around 100 sheets and a photo paper one above it that supports both 15x10cm and 18x13cm sheets. On preparing to print an extension to the output shelf extends and this stops output spilling onto the desk/floor.

On the extreme left of the front is a swivel door that hides an SD card and USB port.

The front edge tapers down and has a shiny finish when switched on a 7x5cm TFT is revealed, this is fixed but it is clear and easy to read both from above and below.

The display shows the time and date at the top of screen – could be important for fax use – and then three touch areas marked Copy, Fax and Scan with a line of six small icons below this. However other icons are easily shown with a flick to the left as this is screen one of three.

I will let you read the speed data as every manufacturer now has to work from the same ISO sheet and the figures given are now possible.

All the tests are performed in Draft mode which in the case of HP is still very clear and crisp and not at all grey. The speeds are taken printing a number of the same pages and the time arrived at by starting to count at page two and stopping at the printing of the penultimate one.

As far as personal printing is concerned there is around 12 seconds from switch on till it’s ready to print and probably another 10 seconds between sending the document and the page or pages printing. The stated monthly printing cycle should be around 1000 pages or less.

This is a two cartridge offering with black in one and tri colour in the other.

You can connect via Ethernet, Wi-Fi or USB the selection is made during installation.

This unit has a sheet feed and a flatbed so scanning can be done with either source. It does not have automatic two sided scanning. You can scan at the unit or from the PC, using the former gives the ability to reduce to 25% or increase to 400%. The output can be saved onto SD Card or USB stick or sent to the PC to be OCR’ed or sent as an image. You can even send a reduced size ready for email transmission. The maximum resolution is 1200x1200.

Most of the above applies to copying but the black resolution is 300x300DPI and greyscale or colour 600x600DPI.

Again the last link at the end will have all the speeds available as well as Fax details for those who need them.

This is a nice easy to use unit ideal for home or small office use; it also supports NFC for those who print from their SmartPhones. For a four ink printer it produces rather good images on photo paper, in fact the images I printed were very good.

RE: HP Envy 7640 printer/scanner  Can you control the scanner settings? Like setting resolution, etc