Unlike multifunction devices, where the scanner is usually a bolt-on basic unit, a dedicated scan can provide additional features. 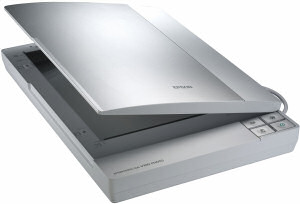 It has been quite a while since I last had the opportunity to try out a new standalone flatbed scanner.  The main reason for this long gap is down to the popularity of multifunctional and all-in-one devices.  These types of product do have the decided advantage of saving on workspace and power source requirements.  However there are occasions when the specific functionality of a dedicated scanner outweighs these considerations.  In the case of the Epson V100 Photo scanner, you get an optical resolution of 3200 x 9600 dpi plus the ability to scan 35mm film strips up to a maximum of six frames per strip or four 35mm mounted slides.

On looks alone, the V100 Photo scanner makes my rather out-of-date unit, which I have to say has provided excellent service over a number of years, look its age.  The sylph-like, matt silver and light grey body of the V100 Photo is certainly pleasing on the eye.  Surprisingly though, despite its slim appearance, the V100 Photo (43 x 28 x 4.3cm) does require slightly more desk space than my current scanner (42 x 25.5cm).  The power and USB 2.0 connections, which are located at the rear of the unit, plus the positioning of the four operational buttons (more on their functionality later) does mean that this scanner really requires a landscape orientation for best ease-of-use.

Setting up the scanner is just a matter of installing the supplied software.  This includes the relevant driver, User Guide, and various software applications and utilities - some of which are standard offerings with Epson printers and multifunctional devices.  On the test machine, the installation took a little over 15 minutes.  Following a system restart, you can attach the scanner to a power source and a vacant USB port (preferably USB 2.0 for optimum results).

The V100 Photo offers three types of scanning modes for general work.  These are Full Auto, Home, and Professional giving varying degrees of control over the scanning operation.  While Auto leaves decisions to the scanner; with Home you can select the document type and activate image adjustment features; while Professional adds features such as image type and resolution settings.  You can also include Dust Removal and Colour Restoration features.

Generally I prefer instigating any scanner operation from my desktop or within an application.  However some prefer to work direct from the scanner - the V100 Photo offers this option using the previously mentioned buttons.  There are clearly labelled specific buttons to send scanned content to the printer or as an Email attachment.  Other buttons carry out a general scan or product content in PDF format.  It was noticeable that these buttons do require firm pressure for a couple of seconds before any response occurred.

Initially I encountered difficulties when attempting to use the product's Scan to Email feature.  Checking the hard disk revealed that the software had created the folder and entries in the Start Menu but has failed to install the necessary files.  Fortunately an updated version of the software supplied by Epson Technical Support resolved the problem.

As part of the package, Epson includes a plastic adapter for holding film strips and 35mm slides.  Using the adapter is fairly straightforward with the scanning process started from the computer or using the scan button.  The scanning performance is on the slow side but this does include the software separating individual images that are being scanned at the same time.  The results achieved by the scanner are excellent.  This criticism of the scanning speed can be levied at other aspects supported by this model.  For example to scan and print an A4 document took 3 minutes 15 seconds compared to under two minutes required by the Epson DX4000 multifunction device.

Generally the results produced by this scanner were of a high quality.  Apart from the difficulty mentioned earlier regarding Scan to Email, the Epson V100 performed well if a little on the slow side.  This scanner has been priced at £69 and it does come with a USB lead unlike printers. From Amazon the price is £61.45 from the following link :

DigiDock are a professional photo scanning company based in the UK.  We scan your photos at 600DPI which make for excellent viewing on your TV screens.  We offer a slideshow creation of your images with music, fades and zoom effects, this makes for a perfect gift for the family

check our website and see what we can do for you

We Scan Photos are a professional company offering photo scanning for your photo collections. Come and take a look at our site for more information: