Oil and water not mixing is a popular conception that I would be surprised if you had not heard many times before. Some might even apply the same though with regards to the operating systems developed by Microsoft and Apple. However those inventive people at Parallels headquarters, based in Seattle, would certainly not agree with this point of view. 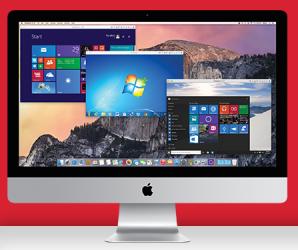 Oil and water not mixing is a popular conception that I would be surprised if you had not heard many times before.  Some might even apply the same though with regards to the operating systems developed by Microsoft and Apple.  However those inventive people at Parallels headquarters, based in Seattle, would certainly not agree with this point of view.

Parallel has developed a solution for mixing Microsoft Windows on a Mac device running the Apple Mac OS software.  This solution is appropriately entitled Parallels Desktop for Mac.  This software, which has now reached the version 11 level, has been developed to allow users to install and run Windows from a Mac computer with the minimal of user intervention.

Having downloaded the Parallel software from Parallels website and activating the product with the supplied alphanumeric 34-character key code, the latest version of Parallels Desktop for Mac was ready for the MacBook Air unit which was acting as the host device for the dual operating systems.  The installed Parallels Desktop software presents its own system bar at the top of the screen and presents you with a Wizard based approach to creating the partnership of the two operating systems.

You are given a choice of guest operating system to reside on the Mac computer.  Your choice of operating systems cover Windows or other operating systems from a DVD or image file plus you have the opportunity to migrate Windows from a computer.  Further options are available to download and have set up various time limited test environments ranging from Windows XP up to the latest Microsoft Edge on Windows 10.  This latter option is useful if you do not have a spare copy of Windows or want to check out a specific version with the Parallels software.  Other free downloads for this Parallels software include Chrome OS, Ubuntu and Android.

For the purpose of this review, I decided to go with the Microsoft IE 11 running on Windows 7 using the software offered as part of the Parallels test option.  The downloading of this software proved to be a fairly lengthy process and so it was scheduled to be carried out over night.  Once downloaded the setting up of Windows within the Mac environment was carried out automatically with no user input being required.  The Parallels software does all the hard work in setting up the quest Windows operating system within the shelter of the MacBook Air.  Getting up the next morning everything was set up and ready to go.

Installing applications that you will be used on the quest Windows operating system is just a matter of going through the normal procedures as you would with a standard Windows system on its own computer.  You might, as I was required to do with the lack of a built in optical drive on my MacBook Air, make special arrangements for getting the new software on the machine.

When attaching a device, such as an external optical drive, hard drive or flash stick, to an available USB port, this act will be recognised by the dual operating system and you will have the option of accessing its content.  This can be carried out using either of the two operating systems with easy transition between the two.

As well as sharing such devices between the two operating systems, you can also share content created by either operating system.  It was a simple matter to copy text and images between appropriate Mac-based and Windows-based applications in either direction.  In some cases copy & paste was used for the transfer while sometimes files made the transition from one operating system to another.

This latest version of the product comes with the claim of being 50% faster than previous versions but I am unable to confirm or deny this as I have not used the product previously.  This version does support Windows 10 with its Cortana digital assistant.  By using the software’s Travel Mode you can temporarily shut down resource intensive services to help extend the battery life of your laptop.

During the review period Parallels Desktop for Mac 11 performed well apart from one minor problem when I decided to try out a Windows game I was reviewing.  While the game looked fine and everything appeared normal, the game cursor failed to interact with some of the game’s graphics.  This did give me the opportunity to discover that the Windows three-finger salute worked to bring up the Start Task Manager and shut down the recalcitrant software.

Despite this single instance, it would be fair to state that Parallels Desktop for Mac 11 does what it say on the tin by providing a user with a Windows environment on a Mac system.  This product is priced at £64.99 and needs an Intel Core 2 Duo processor with 2GB of RAM, 850MB of hard disk space plus 15GB for each installation of Windows.  The Mac computer needs to be running OS X Yosemite 10.10 or OS X Mavericks 10.9.4.