First is a DAB/FM radio from Pure Digital. It has a retro feel with a padded handle and wipe clean material covering it. Second a portable offering called Blighty with a union jack covering the back so you will be unlikely to misplace it. 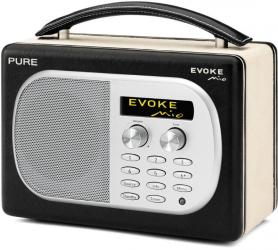 The Pure Evoke Mio is 21x12x16cm, mine was blue/grey and cream and one place Pure think this mains/battery unit will be used is in the kitchen as it includes a kitchen timer. The battery side however only works with the Pure ChargePak.

As with a lot of recent quality speakers the unit has a hole in the base to amplify the sound quality. The only other connection on the base is a twist screw to cover the dock for the optional ChargePak. The sides are clear and the top has only the static slightly domed handle. The back has a column of connectors, DC input at the base then USB (for updates), Auxiliary In, Stereo Out and finally the substantial seven piece rod aerial that extends to 71cm.

Finally the face which has the mono speaker on the left, the right has a 6x1.5cm two line display (yellow on black) twenty character scrolling display.Some such displays are jerky and hard to read but not so with this. Below the display two silvered knobs for volume and tuning. Finally three columns of buttons all well marked.

Initial setup is a matter of selecting your language and power saving option. My unit found 62 DAB stations within a minute. Tuning FM is where the thirty available presets are useful as you initially have to know the frequency. Some stations will just display the frequency while other will show the station name. Once a preset is set tuning that station again is simple. You swap bands using the Source button DAB/FM/Auxiliary are the sequential choices.

The Pure Evoke Mio is available from the link below for £115.99 with free delivery. 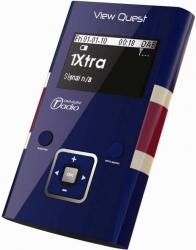 This is a pocket DAB/FM offering smaller than most mobile phones. It is 9x5.5x1.5cm, the face is a dark blue while the back is the union jack, the top and base are silvered. The weight is 78grams and it runs on a solid battery.

The top has connection for earbuds and a simple slider on/off switch. The base has micro USB port used for charging.

I found a huge difference between volume of text and music even on a station like Radio 2 where the music was loud and the text barely hearable.  I found the info option quite a reverlation with some stations only getting a 16% signal. Volume level is adjustable between 1 and 16, 10 was plenty for music but often I needed the maximum of 16 for speech. The provided earbuds gave better speech and music differential but did not improve the signal.

A full scan of DAB took less than a minute and found 62 stations. There is a small 12 page manual which described things adequately.

The View Quest Blighty is available from the link below for £48.92 with free delivery.