The original version of this review was completed a while ago. I held it back to allow AirTies to check out a possible compatibility problem with an item of equipment I was using. As yet I am still waiting for the results of this investigation and so heave decided to release the review. 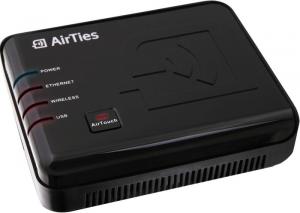 As its initial launch product in theUK, AirTies, a company set up by a management and technical team from Silicon Valley and with its headquarters based inTurkey, has released its Wireless Kit for Internet TV.  This kit consists of two small wireless access point devices (90 x 70 x 20mm) plus two 12v power adapters, two Ethernet cables and a software CD.

While this kit has been designed specifically to work with an Internet-enable television (which many of us do not possess), it should be possible to use the kit with an appropriate conduit such as the ViewSonic VMP74 to provide the necessary link between one of the wireless access points and a television that has an HDMI connection but no Internet connection.  This was the approach I took as I do not have access to an Internet-enable television.

With one wireless access point connected to a television, the other device needs to be attached to a modem router.  Getting the two AirTies units to communicate with each other and their connected devices was a simple matter of depressing a button on top of each access point.  After a short burst of activity, during which various LED lights flashed on and off, a wireless connection was established.

Software is provided on a CD that gives you access to a Network Assistance utility.  Prior to installing this software you do need to disconnect the AirTies devices.  Once the installation is completed you can then re-attach the access points.  Unfortunately, when I tried to carry out this task of reconnecting the two access points, one of the units failed to power up which was hardly an encouraging sign.  Fortunately a replacement unit proved to be more durable and it quickly established a connection with its partner.

Various LED lights on each unit would flash to indicate that there was some activity taking place.  While reassuring in one respect (you know wheels are in motion), this LED flashing could be annoying for some and might be dangerous for those susceptible to epileptic fits.  AirTies suggest that as a solution you hide the access points behind other objects which is a bit of a Heath Robinson approach.

Although I knew that communication was taking place between the two points due to the flashing, the achieved results were not always successful.  I refer in particular to the USB connectivity offered by the two units.  Each access point has a USB port for attached a USB device such as an external hard drive or flash stick enabling users to view any stored content on the attached television.

When I attached either of these devices to one of the access points, the results were the same – a failure to communicate.  In some instances the drive would be recognised with a few folders being identified.  However no actual content could be found even though I had just copied various movie and music files to the USB device.  On other occasions I would be presented with a message that there was no wireless connection although the LED lights were busily flashing away.

I had more success when accessing this content using the Network Assistance software mentioned earlier.  This software gives you a visual representation of your network.  Live connections will be indicated by a green link while a red line is used to indicate that no link could be established.  Tools are available to change the assigned name of each element, view properties and even change the AirTies password.  The displayed diagram was generally accurate, with any updates occurring automatically, although the software did tend to get confused with my main system and the FlowServer running in the background.

The diagram will also show when one or both of the access points has a USB device attached.  By clicking on the icon used to show a USB device you will have full access to the content.  You can add, delete, edit or play any of the media files present.

Having seen a setup using the AirTies wireless kit working without any obvious problems, I am at a loss to explain the problems I encountered with this product.  When it worked it was fine but it didn’t always perform as I expected.  If the opportunity arises to try out the kit using an Internet-enabled television then I will take another look at this product.  AirTies Wireless Kit is priced at £89.99.