Over the years satnavs have got more user-friendly and more sophisticated. Garmins 2598LMTD is a vast improvement over products available even just one or two years ago. It comes with maps covering 45 European countries and free lifetime map updates so will meet the needs of the traveller both today and into the future. Consequently, as well as the first-time buyer, many existing users could well consider that it is s worthwhile upgrade. 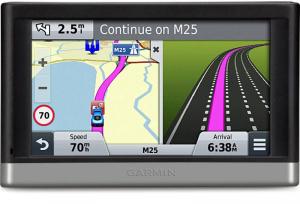 The 2598 is matt black in colour with the exception of the silver styling strip below the 5 inch screen. It is provided with a windscreen suction mount and a 170cm “traffic-compatible” power cable terminating in a mini-USB connector at one end a cigar lighter plug at the other. The mount has a quick-release catch that it would be possible to leave the mount permanently on the windscreen and just quickly detach the unit itself. However, the sight of the mount might prove too tempting for an opportunistic thief who will be looking for the satnav itself.

It has a high sensitivity receiver so that it has even acquired satellites (albeit not reliably) when sitting on my desk and a faster processor which is an all-round improvement. Start-up, route calculations and view updating are all speedier. Having input the destination address it calculates the route and displays distance and expected time of arrival. Two or three possibilities from which to choose may be offered such as when one can go either clockwise or anticlockwise around London to reach the south coast.

At the top of the screen the name of the next road is shown while at the bottom, in smaller letters, is the name of the road along which one is traveling. The Active Lane guidance is a major help in positioning your vehicle as you approach a tricky junction. One very useful improvement is Real Navigation with Real Direction which refers to recognisable landmarks. One is more confident that one is making the correct turn when told to “turn right at the traffic light” rather than just “turn right”.

Digital Traffic, via a built-in DAB receiver, is aimed at providing frequently updated navigation information, including an indication of the expected delay, so that in the event of traffic build ups -- whether as a result of a road traffic accident or heavy traffic -- the 2598 can update the chosen route. Not having used it at peak time or during a holiday weekend, I have not been able to check its effectiveness even though I have found it useful on earlier Garmin devices. Similarly, I have not used the speech technology that enables hands-free operation via voice commands.

This satnav has all the features that one has come to expect in all but the most basic units such as Bluetooth and safety camera warnings with speed limit alerts. Additional features include the Smartphone Link app which allows navigation information to be shared and Garmin Live Services to be shared with the 2598 and a compatible Android smartphone.

Having the map digital traffic upgrades for life at no extra charge will ensure that it can be kept up to date. Available exclusively, at present, from Halfords at £199 the 2598LMTD is a good all-round satnav for the person who travels both in the UK and abroad.