The Freecom Mini Solid State Drive, mSSD, is a small and physically robust portable USB 3.0 device that will meet the needs of the road warrior who needs to have a safe, fast and convenient lightweight backup drive with him at all times. 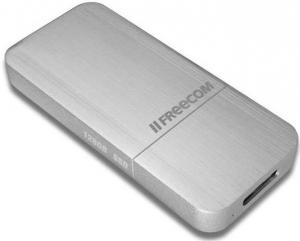 Available in two capacities, 128 and 256MB the mSSD is 80 x 35 x9mm in size and complete with its 25cm USB 3.0 cable weighs just 42g (1.5oz.). Being solid state with a hard aluminium shell it is robust and so will withstand the shocks and knocks that could well damage a hard drive. It has a brushed metallic finish and the activity LED is on one end adjacent to the USB 3.0 connector. As it draws its power from the connected USB port it does not require any external power source.

The supplied neat flip-top box also contains the USB cable, the warranty card and the Quick Install Guide. Installation is straightforward. Just connect it to a free USB port on one's machine. Then, under the "optional" heading in the Guide one double clicks on StartPC.exe, installs the software and saves all the files that were pre-loaded on the mSSD to one's laptop hard disc. Also it suggests under the "optional" heading that one should back up the "preloaded contents (manuals, software and support information)".

The user manual was a generic and covered both mobile and desktop hard drives with chapters on the installation of hardware, drivers and applications as well as hard drive partitioning. The included software is Freecom Backup Assistant, SSD Formatter (which gives the option of NTFS, FAT32 or converting from FAT32 to NTFS (files larger than 4GB cannot be saved on FAT32 formatted drives)), SSD Eraser as well as Nero BackItUp Essentials,

Although the USB specifications are 5Gbit/s (640MB/s) and 480Mbit/s (60MB/s) respectively for USB 3.0 and 2.0, the actual transfer speeds are greatly influenced by file sizes and the actual system configuration so it is not really practical to attempt to quote speeds. In practice, when connected to a USB 3.0 port, normal file transfers appear to instantaneous and it only when carrying out full back-ups that the time taken would become noticeable. However, as USB 3.0 is backwards compatible with 2.0, even where one's current machine only has USB 2.0 one knows that one is reasonably future-proof and will be able to obtain the higher speeds when USB 3.0 becomes available.

Priced at £125 and £245 respectively for the 128 and 256GB versions but available on Amazon for £109 and £174 these are appreciably more expensive than hard drives. Nevertheless, many road warriors will consider that the robustness and low power consumption will justify the cost and that, in addition, the small size and light weight will be a bonus even though they will be disappointed that a pouch to contain both the mSSD and its cable was not provided so that, when in one's kit, the two items have to be "tied together" with an elastic band to ensure the cable does not get mislaid.